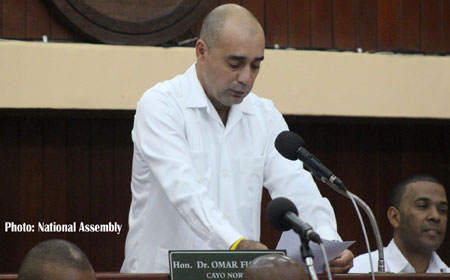 BELIZE CITY, Fri. Mar. 27, 2015–After two days of debate on the proposed national budget, interspersed with political campaigning and mudslinging in the extreme, the House late this evening approved the 2015-2016 budget tabled in Parliament two weeks prior on March 13—a budget which Prime Minister and Minister of Finance Dean Barrow said calls for no new taxes for a consecutive 5 years, contrary to assertions from Opposition Leader Francis Fonseca that the budget is a tax, borrow and spend budget.

While most of the more senior members of Parliament weighed in on the budget on Thursday, Friday’s debate was not without its intrigues.

Julius Espat, PUP area representative for Cayo South, said, in effect, that the budget is bogus.

“This book, Mr. Speaker, disguised as a budget, is useless and has absolutely no credibility!” he said.

While the Opposition pointed to the rising debt stock, the deficit in the national budget for the year now ending, PetroCaribe spending, and the apparent lack of a sustainable economic development plan for Belize, the ruling UDP’s boast has been on infrastructural developments across the country, much of it fueled by PetroCaribe.

Oscar Requeña, Toledo West area representative for the People’s United Party, said, though, that the Government cannot continue to put all its eggs in one basket. He pointed to the fact that today Belize lacks a commercial-scale clothing manufacturing enterprise.

In concluding the marathon debate on the budget, Barrow said that he was very pleased that the Minister of State in the Office of the Prime Minister, UDP area representative for Cayo North, Dr. Omar Figueroa, took the PUP on frontally and “rubbished the charges…” made by the PUP that the budget is a “borrow-and- spend” budget.

Figueroa had said that the UDP does indeed borrow and spend – but it has spent where the people can see the results; it does not borrow only to have those millions vanish without the public seeing the benefits of the borrowing.

He said that as much as 48% of the Government’s current debt stock is the Superbond – and the Superbond, he said to the Opposition members in the House, “is squarely and eternally on you [the PUP].”

Barrow said that apart from that, the Government’s debt stock “is comprised wholly of concessionary borrowing and on such terms as would make it foolish if we were not to embrace the opportunities presented us for plentiful cheap money…”

“We do spend, we will continue to spend; we will continue to borrow on these extremely favorable terms,” Barrow insisted.
Incidentally, Parliament also today approved loan motions totaling nearly $150 million, which were also sent up to the Senate for approval along with the newly approved budget.
In answer to the Opposition’s charge that the UDP has bought the recent municipal elections with PetroCaribe money and is preparing itself to be able to use those borrowed funds to fill its arsenal in advance of the general elections, which may be called well ahead of its due date in 2017, Barrow said that the PUP had reportedly spent US$20 million in Belize City before the general election of 2008 and lost 8 seats out of 10.
“You can’t buy any elections if the people are not with you,” he said.