Anil Asnaney, 50, was killed in cold blood in front of a popular Indian restaurant 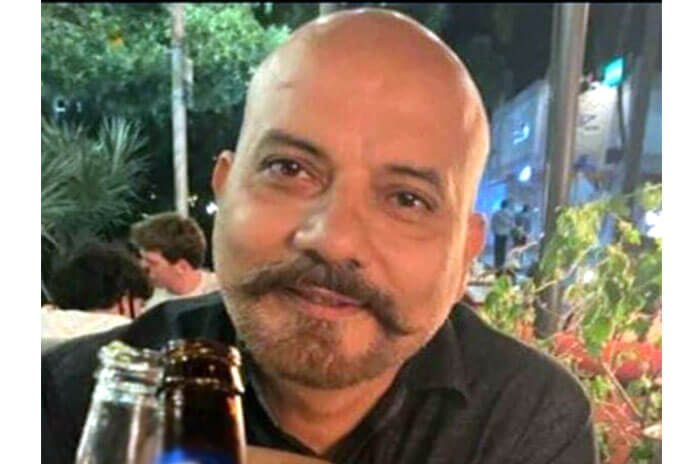 BELIZE CITY, Sun. Nov. 28, 2021 — On Thursday night, sometime around 8:00, a well-known Indian businessman was killed execution-style in front of Sumathi Restaurant on Baymen Avenue. Anil Asnaney’s killing has shocked the Indian community and those who live or do business in the Albert Street area, where he and his wife, Manisha Asnaney, 44, worked in their store, Sensation X-Treme, for years.

Reports are that Asnaney and his wife went to pick up food at the popular Indian restaurant as he often does, but the customary stop at the establishment would lead to moments of horror when two gunmen on bikes cornered him and fired a barrage of bullets at him, killing him almost immediately. The two gunmen are said to have fired as many as five gunshots at the couple as they were about to get in their Nissan Frontier pickup.

His wife, who also sustained a gunshot injury during the bloody attack, was seen on surveillance video trying to resuscitate him, but her attempts were futile, and her husband died in her arms.

Police are trying to ascertain the motive for this brutal slaying. Robbery has been ruled out, since the assailants, after carrying out the execution, left the scene immediately, without attempting to steal anything. Up to news time on Friday, police were unable to inform the media of any leads in their investigation besides saying that the culprits may have been monitoring the movement of the police patrol and struck at an opportune time.

Albert area representative, Tracy Panton, remarked to the media that Asnaney was a generous and helpful member of the Albert community. She said that he was always interested in recommending ways to improve safety measures within the community.

A friend of Asnaney has noted that the businessman, who was known to be a jovial person, was in a somber mood the last time he saw him. That friend told local media that Asnaney and his family have always been loving and supporting of others, so he could not understand why someone would want to hurt them.

The owner of Sumathi restaurant, Subr Mani Velu, said that this is the first incident of this nature that has occurred since he began operating the restaurant.

The attorney of Asnaney’s family released the following statement: “The family is still in shock and mourning the loss of their beloved husband and father. So at this time we have no comment except that they are doing everything they can to cooperate with the relevant authorities to get justice for the loss of their loved one.”

Reports today are that police have detained one person in connection to the shooting and is looking for one other at this time. They have not yet ascertained a motive but believe that Asnaney was targeted directly in a what appears to be a hit.