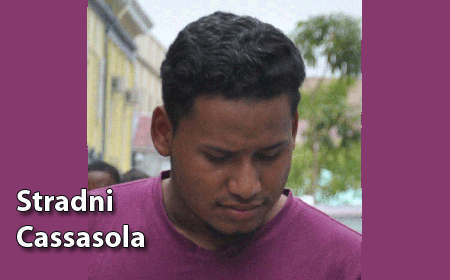 BELIZE CITY, Tues. Jan. 19, 2016–Two nineteen-year-old students from Wesley College Junior College were arraigned on a charge of possession of an unlicensed firearm this morning.

Stradni Cassasola and Demrey Lewis, both residents of Faber’s Road Extension, pleaded not guilty to one count of possession of an unlicensed firearm after Senior Magistrate Sharon Fraser read the charge and asked them first if they understood what she had just read and to enter a plea.

Police charged the two with keeping a firearm without a gun license following a high-speed chase across the Chetumal Street Bridge that ended on Gibson Street.

Cassasola told the court that the arrest and consequent charge are a mistake, because he is employed in the Ministry of National Security.

According to him, he went to the Belize Central Prison on a visit and had the 9mm Taurus pistol in his school bag.

Cassasola said he was told by police that if he could prove that the firearm was the property of the police, he would not face charges.

Magistrate Fraser, however, explained to Cassasola that the facts on the court book did not correspond with anything that he was telling the court.

In the police’s statement on the incident, PC Ramirez and PC Sankey said they were on mobile patrol when they heard what sounded like three gunshots. They then saw a small black car and realized that the sound of the gunshots came from the general direction of where the car was. The occupants of the car drove off when they saw the police vehicle approaching them.

The car was eventually intercepted on Gibson Street and when police asked the two occupants if they had anything to declare, Cassasola told them that he had a gun in his bag.

In court, Magistrate Fraser told the two students, “I don’t know what you are going to do about your education, because I cannot offer you bail.”

She remanded both students to prison until their next court date on March 18.