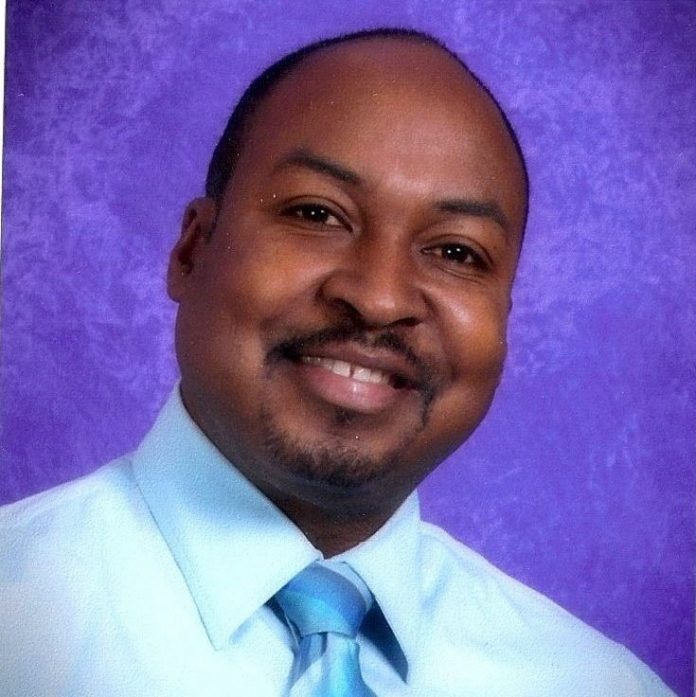 – When he did not improve, on March 27 she says she called the DHS but because Pipersburgh had no travel history, no COVID-19 test was performed on him. She says one would not be done until March 31 and they would not learn of the results until very early Friday, April 3.

– She states that after his positive COVID-19 diagnosis at the WRH “they saw us as delinquents and my husband stopped receiving any attention with relation to his sickness. That entire morning no one did anything for the health of my husband. I pressured my contacts for him to be transferred to Belize City and thanks to Dr. Hidalgo he was finally moved to intensive care at KHMH and he arrived already in a critical state.” 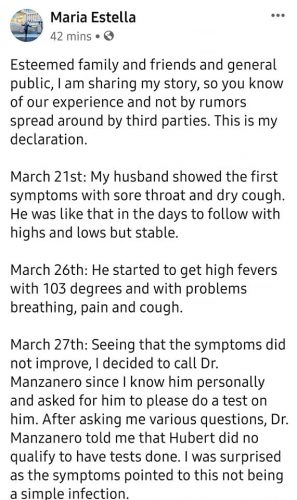 Below is the full statement

*****
“Esteemed family and friends and general public, I am sharing my story, so you know of our experience and not by rumors spread around by third parties. This is my declaration.
March 21st: My husband showed the first symptoms with sore throat and dry cough. He was like that in the days to follow with highs and lows but stable.

March 26th: He started to get high fevers with 103 degrees and with problems breathing, pain and cough.

March 27th: Seeing that the symptoms did not improve, I decided to call Dr. Manzanero since I know him personally and asked for him to please do a test on him. After asking me various questions, Dr. Manzanero told me that Hubert did no qualify to have tests done. I was surprised as the symptoms pointed to this not being a simple infection.

March 29th: I took him to La Loma Luz and was seen by Dr. Camal and was only given medication for fever and respiratory issues.

March 30th: I took him to Godoy’s Clinic for another opinion since the fever and the respiratory problems continued. After some exams we were home.

March 31st: We went back to the same clinic to get more test. At the parking lot Hubert was in a crisis, he could not breathe, and I thought he was having a heart attack. The doctor recommended that we take him to Belmopan to get some X-rays done on his lungs.
He arrived at Belmopan with pneumonia and there was no one to attend to us or who was willing too since he was already a suspected case of Convid-19. During the night he finally got the test for Convid-19. We were told that the test was going to be given the next day. He was placed in an area outside the hospital that is there for emergencies and given IV fluids and oxygen due to difficulties in breathing. It does not even have a bathroom. Imagine a patient with pneumonia that has to walk outside at 3:00 a.m. to search for a toilet.

April 1st: We spent the day in the same situation, without anyone telling us what was happening and without proper care.

April 2nd: I started to really become anxious and upset since the results were not ready and no one was telling me what was happening. I had to call various politicians to see who helped me. Minister Pablo Marin reached Thursday and I complaint to him about the results and he promised that at seven in the night, these would be ready. The results never came.
April 3rd: At 1:30 a.m. I received a call from Dr. Manzanero informing me that the results of the Coronavirus test that was given to Hubert was positive. From that moment forward, throughout the entire morning we were treated with great indifference and little care by the personnel of the hospital, they saw us as delinquents and my husband stopped receiving any attention with relation to his sickness. That entire morning no one did anything for the health of my husband. I pressured my contacts for him to be transferred to Belize City and thanks to Dr. Hidalgo he was finally moved to intensive care at KHMH and he arrived already in a critical state.

What if Dr. Manzanero had conceded for a test to be done on him on Friday the 27th? Maybe he would have received treatment and would be safe. How can he make such a decision when someone has the majority of the symptoms. Just because he had not been in touch with other patients? Because he had not travelled recently? The questions asked were more about who he had been with and not how he is doing, what were the symptoms. He can’t be so naive to deal with the situation as per contact of the first three cases, we do not know exactly how many of us are walking around without symptoms as yet.

We said HERE WE ARE, HE IS SICK and no one paid us mind. We asked for test and they refused, why? To hide that the virus is spreading? Do we have little test? Why did they not close the boarders earlier? Why wait until we had the first case?

Western Regional is not ready to handle any incoming patients, their staff is not ready!!

They ask me how did he get infected, if he had no contact with the first patients? Well let me tell you when the first case was announced, a lot of people left the island in the precise moment it was being announced as people were scared. When they closed it was too late.

Now my husband is no longer with us and we ask for respect as we grief. I make this public since the people that are supposedly handling this pandemic in Belize, have demonstrated to being incapable to do so. They have to act with urgency and none was shown, that is the difference between people surviving this virus or not. He was the first serious case and could not get the attention he required. God forbid it gets out of hand but how will they react when they have 5, 10, 15, 100 people in need of care; will they also need to call to get them transferred to KHMH?

They have already shown that we are not ready.

I also want to express through this medium that my son Karl and Micheal and myself have all been tested and results were negative.”