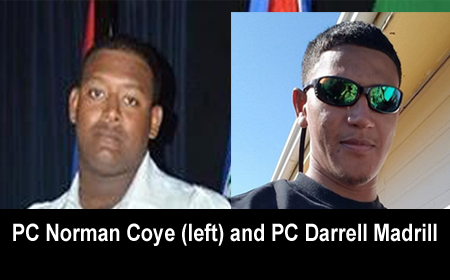 SAN PEDRO, Ambergris Caye, Belize District, Mon. Apr. 3, 2017–A confrontation between the San Pedro police and some residents of the town ended with police shooting in the air and into the ground to disperse the crowd, which resulted in five persons being injured by flying splinters of rocks and cement.

The ruckus occurred at the San Pedro Central Park at about 4:30 Saturday morning, and it was captured on cell phones by people who were at the park. Footage of the shooting was posted on Facebook, and it went viral.

The crowd reportedly became hostile toward the police officers after they pinned down a woman on the ground who was reportedly behaving disorderly and began to rough her up badly as they attempted to take her to the police station.

The woman was repeatedly kicked while she was on the ground.

Quite a few individuals in the crowd, who considered the police’s actions to be an abuse of their authority, started to express their hostility, and one police officer responded to the aggression of the crowd by firing about 10 to 12 rounds of his 9mm pistol into the air and onto the ground to disperse the crowd.

The video footage being circulated on Facebook shows a member of the Belmopan Quick Response Team pointing a shotgun at people, and firing at the feet of people. The policeman walked around them in a semi-circle and fired at the ground near their feet, causing injuries to five persons when the bullets hit rocks in the ground and concrete.

One person’s eyes were reportedly injured as a result.

Commissioner of Police Allen Whylie, who saw the video of the shooting, dispatched officers of the Professional Standards Branch, led by ACP Keith Lino, to investigate the incident.
ACP Lino held a press conference today at the Racoon Street Police Station to update the media on the investigation.

Lino said that the five persons injured in the shooting have been identified as Jose, Alfredo and George Cowo, three brothers who are residents of San Pedro. They suffered injuries to their feet and have reportedly requested court action as a result.

A woman whose feet were also injured requested no court action.

Enfield Henry, 38, also of San Pedro, suffered injuries to his eyes. Enfield, according to a report, this morning will undergo an operation on his right eye, which has become very swollen.

Lino said that the officers who carried out the shooting have not yet been charged for this injury, pending the outcome of Henry’s condition.

The woman who had been held down by police, and was reportedly treated in a rough manner, has not yet been located, and she has not yet given a statement. The three cops have therefore not been charged as yet for any injuries she might have suffered. Lino said that they are trying to locate the woman so that she can give them a statement.

Two policemen of the QRT were arrested and charged with wounding. They are PC Norman Coye and PC Darrell Madril. They were given police bail on Sunday and will be arraigned in court on Tuesday. They have been charged with three counts of wounding and may face additional charges.

Lino said that although the officers will be arraigned at the Magistrate’s Court criminally, they will also be dealt with internally. They will be charged for various breaches of the Code of Conduct governing the behavior of police officers.

Lino said that police are issued with batons, and firing a gun is discouraged. He said that they have checked footage taken by cameras on buildings in the area, and they have talked with many eyewitnesses of the incident about what transpired.

A police report of today, Monday, April 3, states the following regarding the incident: “Alfredo Gaspar Cowo Mancia reported that at about 4:00 a.m. on Saturday, April 1, 2017, while at the Central Park, he saw PC Norman Coye, PC Madrill and PC Magaña dragging two females and began recording the incident with his cell phone.

“He was approached by PC Madrill, who told him to stop videoing and tried to take away his cell phone.  PC Madrill reportedly then punched him on the nose, causing it to bleed.

“His brothers, Jose and George Cowo, approached the officers and PC Coye told them to leave and when they refused, he told the other officers to detain George Cowo.

“George ran away but was caught by PC Madrill, and when Jose and Alfredo went to talk to PC Madrill, PC Coye came toward them and pulled out his 9mm.  He then felt a blow on his left eye and saw PC Madrill with a shotgun in his hand.

“PC Coye then started to shoot in front of his feet and as he stepped back, he saw his right foot bleeding. He also saw PC Madrill shooting and then noticed his left big toe bleeding also.

“He was detained and taken to the police vehicle, where he was later transported to the San Pedro Polyclinic.