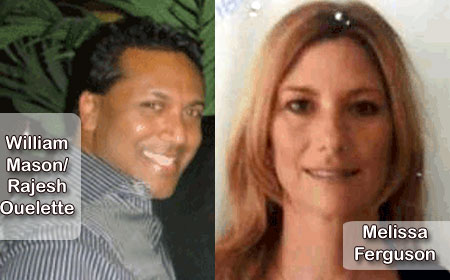 BELIZE CITY, Thurs. July 21, 2016–Belizeans are still struggling to come to terms with the kidnapping and shocking beheading of Pastor Llewellyn Lucas, popularly known as “Pastor Lue,” which came to light last Friday night when Lucas’ head was discovered in the pan of a pickup belonging to, and driven by William Donny Mason, 46, who was born in Guyana but who, unaccountably, has a Belize birthpaper.

In connection with Lucas’ horrible death, police today released a picture of a woman, Mason’s girlfriend, Melissa Ferguson, 56, whom they are seeking for an interview. Police believe that she may still in the country.

The gruesome discovery and Mason’s arrest and exposure have been causing all kinds of problems for the Cabinet of Prime Minister Dean Barrow, because information has come to light that Mason, who was reportedly deported from Canada to Guyana sometime between 2007 and 2010 for a firearm offence, had been wanted by police reportedly in connection with the “attempted kidnapping” of a Canadian man and his wife in Belize.

Furthermore, City Councilor and CEMO member (the Belize City version of NEMO (National Emergency Management Organization), Philip Willoughby, has been named as a good friend of Mason, and a picture has been in circulation that shows former Gang Suppression Unit (GSU) boss, Mark Flowers, together with a public officer who is also the manager of Hon. Saldivar’s football team, Belmopan Bandits, grinning and hugging Mason.

The undisputed information to the media is that some ruling politicians have frequented Mason’s home.

On Monday, the Ministry of National Security held a press conference at the Biltmore Plaza. Police revealed that three men, a Mennonite named David Dodd, Pastor Lue and another unidentified man went to William Mason’s home in Belmopan in the Intelco Hill area on Friday evening. According to police, all three men were subsequently tied up, blindfolded and duct-taped.

The bound-up men were then driven to Mason’s ranch, located between Mile 30 and 31 on the George Price Highway, said police.

Later, the blindfolds were removed from Dodd and the other man,but they noticed that Pastor Lue was not with them. Their abductors then threatened the two men to leave the property and to “pretend like nothing happened.”

However, the distraught men immediately reported the matter to police, who were already investigating Mason for another matter. Police nabbed Mason and several other men at the Bario Fino Bar in Belmopan in relation to that previous matter.

Police had also retained a .9mm firearm and a shotgun from Mason.

On Saturday police visited Mason’s ranch and conducted a search which yielded a burnt corpse believed to be Pastor Lue’s body.

Mason and 4 other men believed to have been involved in that gruesome crime were remanded to prison on Tuesday.

At the Biltmore press conference, Acting Commissioner of Police, Russell Blackett, said that Mason was under investigation for an “attempted kidnapping” that had occurred almost two months ago.

That “attempted kidnapping” involved Mennonite businessman Lloyd Theissen and his wife, which was the reason they were looking for Mason.

Plus TV host and pastor, Louis Wade, corrected Blackett at the press conference, telling him that what happened to the Canadian and his wife was not “attempted kidnapping,” but, in fact, an actual act of kidnapping.

When Amandala spoke to Acting Commissioner Russell Blackett, he confirmed that according to statements received, Mason had given Theissen the impression that he was a shipping agent who could have facilitated the importation of three hundred thousand dollars’ worth of corn through Argentina.

Mason was paid in full and according to a statement given by Theissen, it was Pastor Lue who had delivered half of the payment to him.

The statements revealed that Mason had introduced Lucas to Thiessen as his accountant and advisor, and he had been involved in several meetings with them.

However, things turned sour after Mason failed to produce the shipment of corn and Theissen began to pressure him for the return of his money.

Theissen and his wife had been invited to Mason’s house for a business meeting almost two months ago. Things took a turn for the worse because when they arrived, they too, as had Pastor Lue and his friends, had been blindfolded, ducttaped, tied up and thereafter transported to Mason’s ranch.

They were thereafter released unharmed after they agreeded to make a weekly payment of $2,500 to Mason, which continued, until Theissen and his wife fled to Canada.

Thiessen returned to the country on Tuesday to make an official police complaint. Blackett told Amandala that Thiessen identified Mason and some other men in an identification parade.

Though tragic, Pastor Lue’s beheading revealed Mason’s long trail of deception. Though he has been listed as a Guyanese, with the name Rajesh Ouellet, in June 2015, Mason received a birth certificate as William Mason, born in Crooked Tree, Belize District. Later that month, he received a gun license.

It is anybody’s guess as to how Mason was able to penetrate the security mechanisms for receiving a birth certificate, supposedly put in place by the Barrow government. One thing is for sure: Mason is politically well-connected, especially to Minister of National Security John Saldivar, to whose football team Mason gave a reported $10,000, and to Deputy Prime Minister and Minister of Education Patrick Faber, who, after he was sworn in a Deputy Prime Minister, went to Mason’s house for a “congratulatory drink,” arranged, according to Faber, by City Councilor Philip Willoughby.

Immigration Minister Godwin Hulse could shed no light on how the Guyanese national managed to obtain a certificate saying that he was born in Belize.

At Monday’s press conference, Saldivar claimed that, “At some point last year he [Mason] had made some contributions to my football club, the Bandits, but that is the extent of it. I have not heard or seen Mr. Mason since September last year; we do not at this time have any friendship. The reason for that is because I was provided with background information that convinced me that I ought not to have a relationship with this gentleman.”

Yesterday, Wednesday, when the media spoke to DPM Patrick Faber, he said, “I have met Mr. Donny (William) Mason twice — once in 2015 via Minister John Saldivar and again on the day of my swearing in.

“The reception after my swearing in was done at the Chon San Palace in Belmopan. I received an invitation indirectly from Mr. Mason to come to his home to join him for congratulatory drinks. I accepted that invitation. That is the full extent of my relationship with the person that I knew as Donny Mason.”

It is clear, though, that the fallout from Pastor Lue’s murder is by no means over.

After Prime Minister Barrow confirmed that Hon. Frank “Pawpa” Mena, Minister of State with responsibility for the Ministry of the Public Service, Energy and Public Utilities, had received a campaign donation from Mason in the July 5, 2015 bye-election, Mena’s constituency office confirmed the PM’s remarks.

In a press release by Mena, he stated, “I was later taken to his residence prior to the bye-election by Minister John Saldivar. Mr. Donny Mason, who was presented to me as a businessman, contributed $10,000 to my campaign. At no time did I promise to offer any special services or access by virtue of my position to Mr. Mason.”

The People’s United Party, in a press conference held yesterday, Wednesday, called on the Prime Minister to remove Saldivar as head of the Ministry of National Security and to contract independent investigators for an investigation into the beheading of Pastor Lue.

Opposition Leader John Briceño stated: “It would seem that Mr. Mason, Ouellet, Rajeh, Ferguson, whatever his name is, provided unlimited financing to well-connected people and no doubt expected in return unlimited protection and financial gains.

“Everything we know of this absurd affair between William Mason and members of Mr. Barrow’s Cabinet and by extension several police officers lead us to believe that the police cannot be expected to properly and exhaustively investigate this case.

“We therefore demand that an international impartial investigator be immediately commissioned. We also demand that a fully qualified forensic expert be brought in to gather and analyze the forensic evidence. All we have seen in the Penner passport scandal and the Edmond Castro visa scandal has convinced us that an impartial investigation is impossible under the circumstances.”

Briceño further stated, “In light of this I call on the Prime Minister to urgently remove the Minister of Police from his post. We believe he can no longer be expected to preside impartially and without fear or favor over The Ministry of National Security, and now, how can we expect the police to investigate their own boss?”

“The head of the GSU should be made to stand down. His character in now questionable and also Minister of Education and Youth, by his imprudent association to an international con artist, should at the very least be publicly reprimanded,” Briceño said.

Police have since retrieved video footage of Lucas’ kidnapping. Deputy Commissioner Blackett yesterday told the media, “This is a very thorough video and at present our experts at the police information technology unit are reviewing it and again. They have been doing that since Saturday morning, all through yesterday.

“I myself took a look at it and I’m convinced that yes, these people acted callously and from what I have seen, it shows that the conspiracy theory definitely is in place.”

While this incident has raised national concern, this is not the country’s first beheading. In May of last year, Edilberto Madrid, who was believed to have been a close associate of Russell Hyde in Roaring Creek, was found headless floating in the Roaring Creek River.

Madrid’s friend, Steven Hyde, had been found hours before in a shallow grave in a state that police at the time considered “mutilated.”

Russell Hyde was later shot four times at close range with a shotgun.