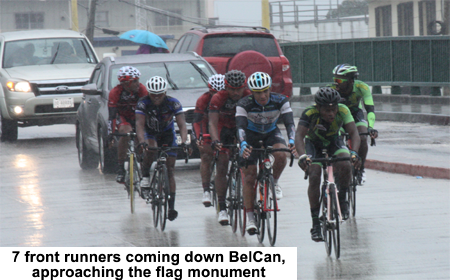 BELIZE CITY, Mon. Feb. 29, 2016–For the first time ever, the Belmopan Cycling Classic, now in its 35th year of running, actually finished where it started in the capital city of Belmopan. After taking the 50 mile journey to the old capital yesterday morning, the Elites, Under 23 and Masters categories traversed Central American Boulevard, over the Belcan Bridge, and circled the flag monument roundabout under overcast skies and drizzling north rain, before retracing their path back onto the George Price Highway, and back to Belmopan, to complete the 100 mile journey. The Juniors/Youth and Females went only as far as Gracie Rock, before returning to Belmopan, for a 60 mile trek.

In the big Elite/U-23/Masters race, 48 started and 41 finished, with Joel Vanegas (Digicell-4G) taking top honors, followed by teammate Giovanni Lovell (Digicell-4g), both clocking 3:53.03. They were followed 36 seconds later by a group of 10.

The Female race saw 5 of 6 starters finishing, with Kaya Cattouse (C-Ray) beating Alicia Thompson (Belize Bank Swoosh) to the finish line, both clocking 2:52.38. They finished a comfortable 5 minutes ahead of the other 3 finishers, Patricia Chavarria, Gabrielle Lovell and Gina Lovell.

In the Juniors/Youths, a field of 28 started, with 21 completing the journey. Like with the Elites, a small breakaway group of 3 riders crossed the line in 2:30.13, with 1st place going to Kaydine Pinelo (Smart Junior Cycling), 2nd Andre Belisle (Cabral/Marin Cycling), and 3rd Ernest Banner (Big Shep). They were followed 12 seconds later by a peleton of 15 cyclists, all clocking 2:30.25.

We’ll have more details in our weekend issue, as this is the last major race before the big Cross Country, and it can be used as a barometer to gauge the potential of cyclists come Holy Saturday.

BELMOPAN, Wed. Aug. 12, 2020-- The Football Federation of Belize (FFB) is proud to announce the appointment of Raymond Reynord Garbutt as the new...
Read more
Sports

It’s “Palma,” after all – the Wilfred “Palma” Davis saga

BELMOPAN, Fri. July 31, 2020-- The Football Federation of Belize (FFB) is proud to announce that Coach Dale Pelayo has been appointed as Head...
Read more
- Advertisment -