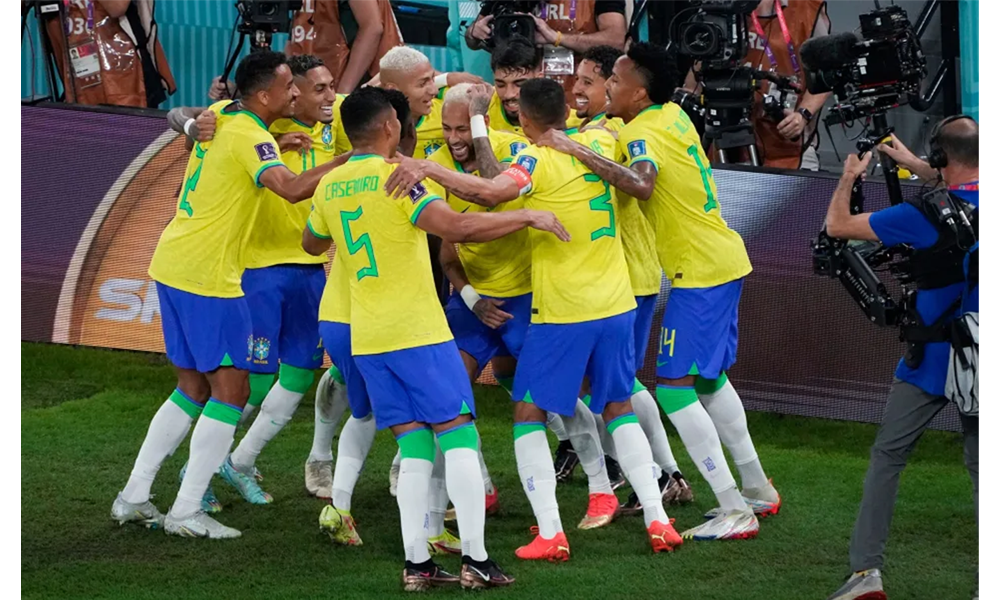 Photo: Neymar dances with his Brazil team-mates after their 4-1 win against South Korea in the last 16 – AP

With the round of 16 done and dusted, the World Cup has been whittled down to eight teams.

The Netherlands cruised past the USA to become the first side to confirm their place in the quarter-finals, before Argentina – inspired by Lionel Messi – narrowly overcame Australia. France joined them with a 3-1 win against Poland on Sunday, before England followed up with a 3-0 demolition of Senegal.

Japan, perhaps the tournament’s biggest overachievers with victories against Germany and Spain at the group stage, went out in agonising fashion on Monday, losing to Croatia on penalties having led in normal time only to be pegged back by Ivan Perisic. Brazil, meanwhile, cemented their status as favourites with a stylish 4-1 win against South Korea.

Morocco and Portugal became the final sides to book their places in the quarters, the former besting Spain via a penalty shoot-out and the latter waltzing past Switzerland. They will now face off for a place in the final four.

England take on France in the pick of the quarter-final ties, though the Netherlands’ clash with Argentina could also become, as they say, football heritage.

Croatia will be hard pressed to beat Brazil but, with Luka Modric still imperious at the age of 37, never say never. Here’s everything you need to know before the quarter-finals get underway.

What is the World Cup schedule for the knockout stage?

Who’s leading the race for the Golden Boot?
At the end of the group stages, Marcus Rashford was among the front-runners. Now, Kylian Mbapp has a clear lead…
How did each team progress to the last 16?

In Group A – Final standings
Netherlands topped the group after beating Qatar in their final match. Senegal edged out Ecuador 2-1 to progress as runners-up. Qatar were the first team knocked out of the World Cup and lost all three of their matches, scoring only one goal.

In Group B – Final standings
England progressed as group winners after cruising past Wales in their final game. Their 3-0 win means Wales finished bottom, while the USA made it through as runners-up after squeezing past Iran in their decider.

In Group C – Final standings
After losing their opening game to Saudi Arabia, Argentina completed their turnaround in fortunes by beating Poland to top the group. Poland, despite losing to the South Americans, sneaked through to the knockouts in second place on goal difference. That came after Mexico could only beat Saudi Arabia 2-1, therefore having to settle for third place, with Saudi Arabia finishing bottom.

In Group D – Final standings
France are through, and still topped the group despite their surprise defeat to Tunisia in their final group game. Australia stunned Denmark 1-0 in their own final group game to qualify as runners-up, level on points with France but second on goal difference. Tunisia finished third on four points while Denmark, many people’s dark horses pre-tournament, picked up a single point in fourth.

In Group E – Final standings
Japan won the group after their shock victory over Spain in the final round, which came as a result of a goal that caused a huge controversy because the ball appeared to be out of play in the build-up. Spain took second place despite their defeat. Germany are out of the World Cup despite beating Costa Rica in their final match. Costa Rica finished bottom.

In Group F – Final standings
Morocco went through as surprise group winners on seven points after their 2-1 win over  Canada. Croatia managed to hold on to second place after a 0-0 draw with Belgium in a match that will be remembered for the hat-trick of golden opportunities missed late on by Romelu Lukaku.

In Group G – Final standings
Brazil topped the group despite  losing to Cameroon on the final evening of group-stage action.  Switzerland  finished second thanks to their ill-tempered victory over Serbia.  Cameroon  and  Serbia  both went out.

In Group H – Final standings
After a dramatic final two games  Portugal qualified as group winners despite losing 2-1 to South Korea. The late winner for the Koreans carried them through as runners-up on goals scored over Uruguay, whose 2-0 win over Ghana was not enough to carry them through.