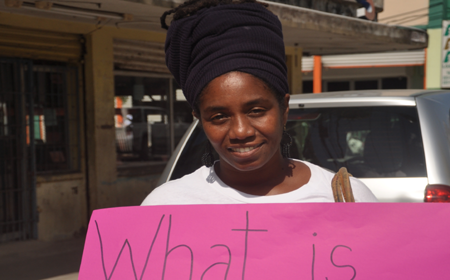 BELIZE CITY, Mon. Jan. 26, 2015–Community activist YaYa Marin Coleman’s message today, as she continued her solitary protest, was a question, handwritten on an off-pink Bristol board, “What is your Piss House story?”

She took up her solitary position on Queen Street, just across from the Queen Street Police Station, which houses the most unsanitary holding cell in the country – which has been dubbed “Piss House” (a title it got even before Belize got its independence in 1981) for good reason.

People are locked in there for days at a time, and there are no toilet facilities, nor anywhere to sleep other than the floor, yes, the sometimes very cold floor. One wonders why there has to be a protest, anyhow; can’t the politicians and the senior officers smell what is before their very noses?

Ya Ya has been protesting the conditions at the Queen Street Police Station holding cell since the first week of November 2014.

Up until now, however, despite a momentary focus of the media on this one-woman protest, the Barrow government has remained noncommittal about improving the conditions at the Queen Street Police Station holding cell, and indeed, at all the holding cells throughout the country.

On that first day that she launched her one-woman protest, Ya Ya declared that she planned to protest the conditions at Belize’s largest police station every Monday, “as long as they give me the permit.”

The Chief Executive Officer in the Ministry of National Security, Retired Colonel George Lovell, told 7 News on Christmas Eve that government can, but will not necessarily use funds, to improve the condition of the holding cell.

CEO Lovell said that he had the opportunity to visit the Belmopan Police Station holding cell and, he noted, “I went there the stench, the odor you have are in there. Then you have our police officers working in there and I had to go and ask if there is anything we can do in the interim, because we have to try and fix what we have right now before we can purposely design cells that are well-ventilated and away from where we have our constant day-to-day movements of people and those who administrate the police station.”

Lovell added: “So certainly we need to look at those areas, but I cannot make any promises it will happen any time soon, even though yes, the monies can be used for that.”

So without a specific commitment from the government that they will address the conditions of the “Piss House” condition, Ya Ya will continue to protest.