13 of Barrow’s former and current Ministers named in immigration scandal! 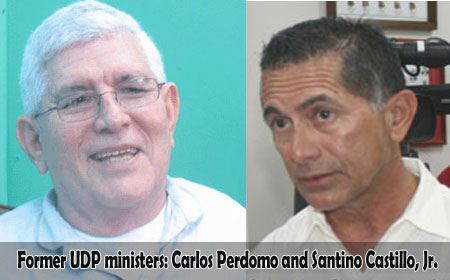 BELIZE CITY, Thurs. Aug. 25, 2016–John Saldivar of Belmopan, Erwin Contreras of Cayo West, Gaspar Vega of Orange Walk North and Rene Montero of Cayo Central are among a list of high-ranking UDP Cabinet ministers who allegedly had intervened in the nationality process without any provision to do so in the Nationality Act between 2011 and 2013, according to an explosive audit published by the Auditor General, Dorothy Bradley.

Manuel Heredia of Belize Rural South and Pablo Marin of Corozal Bay round out the list of current UDP ministers named for intervening in the nationality process during the period audited. Former UDP ministers like Eden Martinez of Toledo East, Elvin Penner of Cayo Northeast and Ramon Witz of Cayo South were also pinpointed by the audit.

Retired UDP ministers Santiago Castillo and Carlos Perdomo of Caribbean Shores along with Gabriel Martinez were also listed by the Auditor General.

However, at this time, the report has not specifically revealed how each of these former and current UDP ministers intervened in the nationality process.

According to the audit, “Ministers Carlos Perdomo and Elvin Penner were among those Ministers who had requested that nationality files be processed while they were the Ministers of Immigration and this fact alone is capable of causing intimidation and pressure on the staff of the Nationality Section to process files for persons who did not qualify for Belizean nationality as we found in several cases.”

The audit further claims that several of these Ministers, “may not have known the persons they were recommending for Belizean nationality.”

For example, the audit cites an undated letter from Minister Edmond Castro retrieved from a nationality file for Olena Moskalyk Curly and Mykola Moskalyk which stated, “I hereby recommend for the file of Oteha Mockajtwik (BNA 28077/12) to be send to the Director of immigration desk to be expedited. Thank you for your assistants [sic].”

The audit affirms that Castro did not know Olena Moskalyk because the letter he personally signed had her name spelt “Oteha Mockajtwik”. Her nationality application was opened in the name “Oteha”, which, according to the audit, suggests that, “no official document from the applicant was submitted before the processing of her file began…”

Nevertheless, she received a Belizean nationality certificate dated February 9, 2012, in the name of Olena Moskalyk three days after she had entered Belize, and by February 24, 2012, she was issued a Belizean passport.

In another instance, this time involving former Minister Santiago Castillo, Jr., he requested the processing of three nationality files for Chinese nationals who, according to the audit, he referred to as “supporters and constituents” even before they were given Belizean nationality.

According to the audit, Castillo kept referring to two of the three applicants as “she” and “her” when they were two male applicants.

The issue of private swearing-in ceremonies for persons with approved Belizean nationality was also brought into question by the Auditor General after a letter dated January 9, 2012, was discovered in the nationality file of Wael Harmouch, apparently from the desk of Cayo Central representative Rene Montero, addressed to then Immigration Director Ruth Meighan.

In the letter, Montero asked Meighan to facilitate him with a series of applications, “for the ceremonies to be held on the 13th January 2012.”

In an interview with former Minister of Immigration Carlos Perdomo on December 8 2014, regarding his alleged intervention into the processing of a nationality application for Paul Ku, his response was, “…I do not think I directed anything in regards to passports. I would send a note to Ruth Meighan asking for her to kindly assist in regard to people who came to the Ministry for help with their BNA (Belize Nationality Application) file numbers because their applications had been unapproved for a long time.”

Several Chinese and Lebanese persons were assisted by prominent current and former UDP Ministers in their bid for nationality and passport documents.