Home Features $183.6 mil in losses due to Hurricane Earl
Features 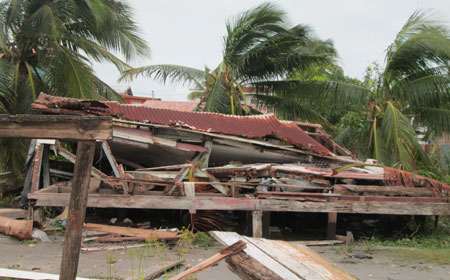 BELIZE CITY, Fri. Aug. 26, 2016–The damage wrought by Hurricane Earl, which struck Belize on August 3 and 4, 2016, is now estimated at $183.6 million, according to Prime Minister Dean Barrow, who gave a report in Parliament on Friday.

Barrow had previously told the press that individual property losses had been estimated at upwards of $15 million and losses to agriculture and tourism at over $100 million.

In his presentation today, he said that losses to the utility companies—the Belize Telemedia Limited and the Belize Electricity Limited—amounted to an estimated $25 million.

Meanwhile, damage to roads was estimated at $29.4 million.

According to Barrow, 4,684 households were impacted, amounting to an estimated 17,000 persons in the Belize, Cayo, Orange Walk and Stann Creek Districts.