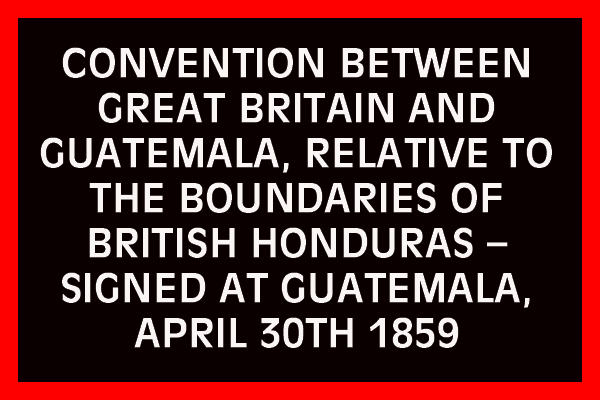 Whereas the boundary of Her Majesty’s settlement and possessions in the Bay of Honduras, and the territories of the Republic of Guatemala, has not yet been ascertained and marked out; Her Majesty the Queen of the United Kingdom of Great Britain and Northern Ireland, and the Republic of Guatemala, being desirous with aaview to improve and perpetuate the friendly relations which happily subsists between the two countries, to define the boundary aforesaid, have resolved to conclude a Convention for that purpose and have named as their Plenipotentiaries, that is to say:

Her majesty the Queen of the United Kingdom of Great Britain and Northern Ireland, Charles Lennox Wylie, Esquire, Her Britannic Majesty’s Chargé d’Affaires to the Republic of Guatemala;

And his Excellency the President of the Republic of Guatemala, Don Pedro de Aycinena, Councillor of State and Minister of Foreign Affairs;

Who after having communicated to each other their respective full powers, found in good and due form, have agreed upon and concluded the following Articles:

Article I. It is agreed between her Britannic Majesty and the Republic of Guatemala that the boundary between the Republic and the British Settlement and Possessions in the Bay of Honduras, as they existed previous to and on the 1st of January 1850, and have continued to exist up to the present time, was and is as follows:

II. Her Britannic Majesty and the Republic of Guatemala shall, within 12 months after the exchange of the ratification of the present Convention, appoint each a Commissioner for the purpose of designating and marking out the boundary described in the preceding Article. Such Commissioners shall ascertain the latitude and longitude of Gracias a Dios Falls and of Garbutt’s Falls, and shall cause the line of boundary between Garbutt’s Falls and the Mexican Territory to be opened and marked where necessary, as a protection against future trespasses.

III. The Commissioners mentioned in the preceding Article shall meet at such place or places be hereafter fixed, at the earliest convenient period after they have been respectively named; and shall before proceeding to any business, make and subscribe a solemn declaration that they will impartially and carefully examine and decide, to the best of their judgment, and according to justice and equity, without fear, favour or affection to their own country, upon all matters referred to them for their decision, and such declaration shall be entered on the record of their proceedings.

The Commissioners shall then, and before proceeding to any other business, name some third person to act as arbitrator or umpire in any case or cases in which they themselves differ in opinion. If they should not be able to agree on the choice of such a third person, they shall each name a person; and in each and every case in which the Commissioners may differ in opinion as to the decision which they ought to give, it shall be determined by lot which of the two persons named shall be arbitrator or umpire in that particular case. The person or persons so to be chosen shall, before proceeding to act, make, and subscribe a solemn declaration, in a form similar to that which have already have been made and subscribed by the Commissioners, which declaration shall also be entered on the record of the proceeding. In the event of the death, absence or incapacity of either such Commissioners, or of either such arbitrators or umpires, of his omitting, or declining, or ceasing to act, another person shall be named, in the same manner, to act in his place or stand, and shall make and subscribe such declaration as aforesaid.

Her Britannic Majesty and the Republic of Guatemala shall engage to consider the decision of the two Commissioners conjointly, or of the arbitrator or umpire, as the case may be, as final and conclusive on the matters to be respectively referred to their decision, and forthwith to give full effect to the same.

IV. The Commissioners hereinbefore mentioned shall make to each of their respective Governments a joint report or declaration, under their hands and seals, accompanied with a map or maps in quadruplicate (two for each Government), certified by them to be true maps of the boundary defined in the present Treaty, and traversed and examined by them.

V. The Commissioners and the arbitrator or umpire shall keep accurate records and correct minutes or notes of all their proceedings, with the dates thereof, and shall appoint and employ such surveyors, clerk or clerks, or other persons, as they shall find necessary to assist them in the transaction of the business which may come before them.

VI. It is further agreed that the channels in the water line of the boundary described in Article I of the present Convention, shall be equally free and open to the vessels and boats of both Parties; and that any islands which may be found therein shall belong to that party on whose side of the main navigable channel they are situated.

VII. With the object of practically carrying out the views set forth in the preamble of the present Convention, for improving and perpetuating the friendly relations which at present so happily exist between the two High Contracting Parties, they mutually agree conjointly to use their best efforts, by taking adequate means for establishing the easiest communication (either by means of a cart-road, or employing the rivers, or both united, according to the opinion of the surveying engineers), between the fittest place on the Atlantic coast, near the settlement of Belize and the Capital of Guatemala; whereby the commerce of England on the one hand, and the material prosperity of the Republic on the other, cannot fail to be sensibly increased, at the same time that the limits of the two countries being now clearly defined, all further encroachments by either party on the territory of the other will be effectually checked and prevented for the future.

VIII. The present Convention shall be ratified, and the ratifications shall be exchanged at London or Guatemala as soon as possible within the space of 6 months.

In witness whereof, the respective, Plenipotentiaries have signed, and have affixed thereto the seals of their arms.

(Text provided to us upon request by the Belize Ministry of Foreign Affairs.)