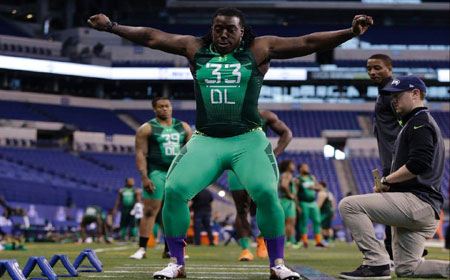 BELIZE CITY, Mon. May 4, 2015–Attached is the stats on Rakeem Nunez-Roches, who was drafted by the Kansas City Chiefs last Saturday… Nice to have another Belizean excelling abroad. Let’s hope he makes the team now.

Nunez-Roches decided to skip his senior as a Southern Miss Golden Eagle and entered his name in the NFL Draft. Nunez-Roches who is from Dangriga Belize, was at Southern Miss for four seasons, but only got serious playing time in 2012 and 2014 (he was limited in 2013 due to injury). This most recent season, he recorded 58 total tackles and had 3 sacks. The general consensus among the folks that follow the NFL Draft is that he will either be a pick in the late rounds or will be picked up as an undrafted free agent.

Rakeem Nunez-Roches is a talented prospect however, he is still very raw. That being said, given the right situation, I could see him being a solid contributor in the NFL. He may not be a player that will play every down in the pros, but still gets enough reps to make a difference. It’ll be interesting to watch his career pan out.

(Ed. Note: It’s another milestone for Belize. The Jewel is behind you all the way, Rakeem!)