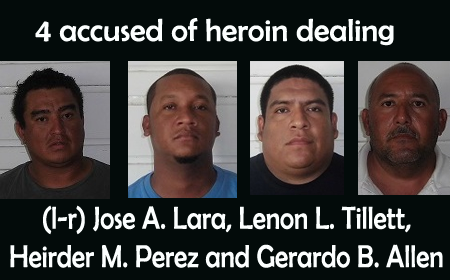 COROZAL TOWN–The Police Anti-Drug Unit (ADU) has busted four men with over $2 million dollars’ worth of heroin, which was found in a vehicle in which they were travelling.

The men were busted on the outskirts of Corozal Town near a restaurant in front of which their vehicle was parked, at about 7:00 Tuesday evening.

The ADU reported that they had been conducting an operation in Corozal Town and were also looking for a stolen vehicle. While driving around town to find the stolen vehicle, they passed a restaurant in the south end of town and saw a man carrying a gun, and three other men were standing near a vehicle that was parked outside the restaurant, which matched the description of the stolen vehicle they were looking for. 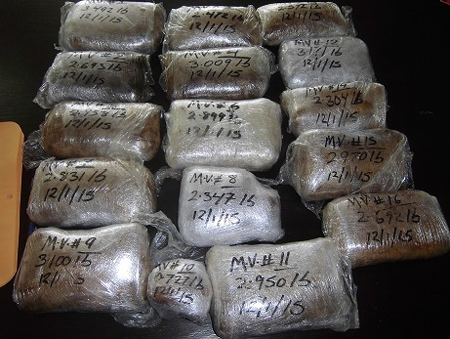 The four men standing near the vehicle at the time of the bust were Jose Antonio Lara, 32, a fisherman and tour guide of Julio Street, San Pedro Town; Lenon Leonardo Tillett, 30, of Ebony Street, Belize City, a BEL contractor; Gerardo Beraldo Allen, 42, a tour guide of Back Street, Caye Caulker; and Heirder Martin Perez, 35, an administrative assistant for Hol Chan Marine Reserve, who resides in the Escalante Subdivision of San Pedro Town. 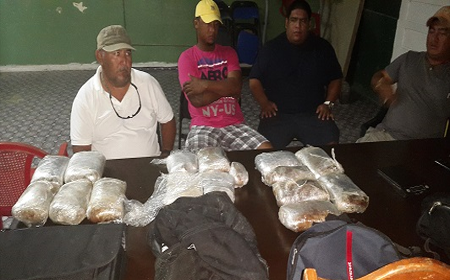 The ADU stopped and approached the vehicle for a closer look. They then went to Perez, who was armed with a 9mm pistol, and conducted a routine search on him and the other three men who were with him, but nothing was found. Perez was also able to produce a license for the pistol, which was loaded with 13 live 9mm rounds of Aguila ammunition.

Police then searched the vehicle and found a scale to weigh drugs and three bags behind the back seat. The officers opened the bags; in one of them, they found luggage, and in the other two, they discovered 15 parcels, which contained heroin. Together, the heroin in the parcels weighed 43 pounds, 4.11.5 ounces, which has an estimated street value of BZ$2,476,555.

The men were all arrested and taken to the Corozal Police Station, where they were charged with drug trafficking.

Yesterday, Wednesday, they were all taken to the Orange Walk Magistrate’s Court, where they appeared before Magistrate Merlene Moody, who arraigned them on the charge. No plea was taken and they were remanded to the Belize Central Prison until Monday, February 23, when they will be returned to court.

The origin of the drug is yet unknown, but police are sure that the drug was being taken to Mexico then to the United States. The grade of the drug is also yet unknown, and so the actual value of the heroin could be more than initial estimates, since high-quality heroin fetches higher prices on the street market.

This is the second largest drug bust made by the Police Anti-Drug Unit. In August they found 120 pounds of crystal meth, on the back seat of a car in Orange Walk Town.