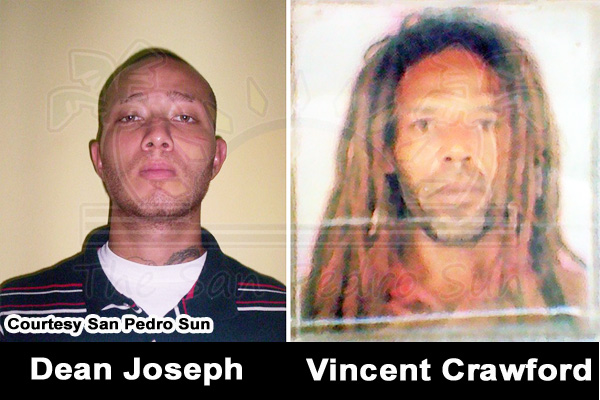 Over the last few years, a number of men have gone missing from San Pedro

Vincent Crawford, 32, and Dean Joseph, 35, of the San Mateo area of San Pedro, have been reported missing since they left home on Saturday, March 1.

Tessa Ochaeta, Dean Joseph’s common-law wife, reported that Joseph left home that Saturday with a man known to her as “Chuku.” They were going to work as security guards at a construction site in the Roebles Point area of northern San Pedro.

Since then, however, the men have not been seen or heard from.

Police report that two security guards in the northern Ambergris Caye area saw Crawford and Joseph and five other men at about 10:30 that Saturday morning, March 1. The men were walking along the beach in a northerly direction.

The guards reported that Joseph and Crawford said that they were going to camp at a base in the Bacalar Chico area in northern San Pedro, and the men then left. The guards say that that was the last time they saw them.

The two men, who are known by San Pedro police, were reported missing on Friday, March 7.

Dean Joseph is of fair complexion, slimly built, and bald. He has light brown eyes and is about 6 feet 1 inch tall. He has several tattoos on his body, with the most visible one being that of the Virgin Mary and Jesus Christ around his neck and arms.

Crawford is described as being brown skinned, with brown dreadlocks, a narrow face and a scar on his forehead. He is of medium build and stands 5 feet 11 inches in height.

Also missing from San Pedro is Elias Hernandez, who was reported missing by his sister on November 22, 2013 after leaving his home on November 12.

According to the San Pedro Sun, several people have gone missing on the island, without leaving a trace of their whereabouts. The last person to go missing before these incidents was Jeremy Baptist on May 23rd of last year. At the time, police said that he had been shot and killed, but despite blood stains found on a vessel connected to him, his body was never recovered and the main suspect has been released.

Police have been following a number of leads into Hernandez’s disappearance on northern Ambergris Caye, but none of them have produced results.

While Hernandez is being treated as a missing person, police fear that he may have been killed and his body disposed of.