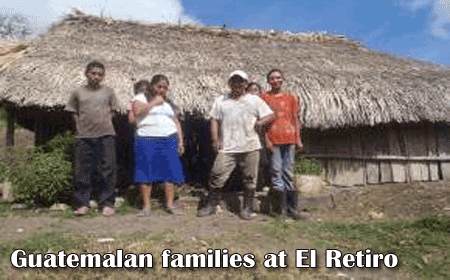 BELIZE CITY, Mon. June 13, 2016–Acting Commander of the Belize Defence Force (BDF), Lt. Col. Louis Sutherland, confirmed to Amandala today that an illegal settlement of Guatemalans—6 families of 20 persons, including a baby and a two-year-old—was found inside Belizean territory, at a location called El Retiro, between 90 and 150 meters inside Belize.

Retiro has over the years been targeted by illegal settlers, and as we reported back in 2010, there was also a Honduran who had taken up illegal residence in the area. Thirty-one persons were reportedly living in the area back in 2010. However, Belizean authorities had reportedly cleared those illegal settlers. Of note is that by law, not even Belizeans are allowed to live in the park.

The Guatemalans who were recently discovered there were planting marijuana, coffee and pumpkins, and there were patches of old corn, Sutherland indicated.

The location—falling within the Chiquibul National Park, according to Sutherland—matches with the location of an illegal dwelling we found via satellite imagery last Sunday, and which we shared with Sutherland last week, as we queried what action the Government of Belize would be taking to address that illegal occupation, as well as three others that had been reported to us last December.

At the time when we were querying the illegal occupation inside the national park, we were also told that allegations had been levied by Guatemalans that Belize Defence Force (BDF) officers had crossed the border to destroy their crops sometime during the previous week.

An official source in the Ministry of National Security told our newspaper last week that the allegation was untrue.

In an official release by the Ministry today, the Belize Defence Force said that “a joint patrol was conducted in the areas of Valentin Camp, Retiro, Cebada and Sapote during the period 29 May, 2016 to 9 June 2016.”

The release further stated, “Members of the Belize Defence Force, with the support of the Belize Police Department, Forestry Department, Ministry of Human Development and Friends for Conservation and Development, destroyed 650 marijuana plants of varying height, 50 acres of pumpkin and 100 coffee plants. 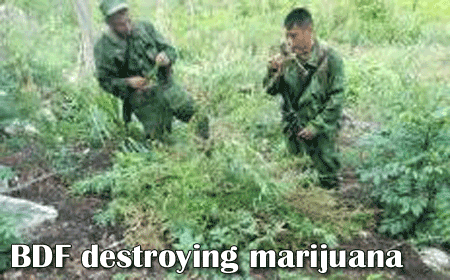 “Also six families consisting of 20 persons were found to be living in Retiro (Belize).”

Sutherland confirmed that the Guatemalans, who had built thatched homes with trees, presumably from the area, which they had ripped into lumber, were found at the same location which was referenced in our report last week.

According to Sutherland, the Guatemalans claimed that they had been there between two and twenty years—a claim which he said concerns him, since the BDF patrol the area frequently.

Last week, Friends for Conservation and Development, the NGO co-managing the Chiquibul National Park, where the illegal dwelling was observed, indicated to us that the incursion was “fresh” but that it was being addressed.

According to Sutherland, there are three observation posts in the area: at Valentin, Cebada and Rio Blanco.

Whereas the press release issued today said that the Guatemalans have been ordered to leave, Sutherland clarified that this was an error.

He explained that the confidence-building measures which Belize and Guatemala signed to set a framework for relations, including the removal of illegal settlers within a 1 kilometer of the border, would apply.

He said that the information is being transmitted to the Ministry of Foreign Affairs, which will ask the Organization of American States (OAS) for verification and then the Government of Belize will put into effect an order to leave.

In other news, the BDF reported on another marijuana bust, this time in northern Belize. An official report said that three men — Edilberto Ku, 44, a Belizean vegetable vendor of Patachakan Village; John Triminio, 59, a Belizean farmer from Xaibe Village; and Gabriel Chan, 28, a Belizean mason of Patachakan Village — were detained and charged after a Belize Defence Force patrol, conducted in the area of Patchakan on Saturday, June 11, 2016, led to the discovery of 85 pounds of compressed marijuana, believed to have a street value of over BZ$7,000.

A release from the Ministry of National Security said that the men were handed over to the Corozal Police Station, where they were processed and charged.

In a third drug-related incident, Orange Walk police reported that over 23,000 grams of marijuana, 12,000 grams of cocaine, 20 grams of crack cocaine and 7 grams of heroin and an assortment of drug equipment, valued at about $1 million, had been confiscated and the drugs destroyed in the furnace at the Tower Hill sugar factory on Friday morning.