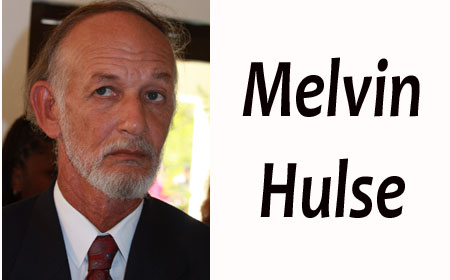 BELIZE CITY, Wed. Aug. 26, 2015–In June, Melvin “Flippin” Hulse, a former United Democratic Party (UDP) Cabinet minister and then standard bearer for the Stann Creek West constituency, had a conversation with an unnamed person, during which he lashed out at the UDP government of Prime Minister Dean O. Barrow.

As a consequence of that conversation, which had secretly been recorded by that unnamed person, and was subsequently made public by the Opposition People’s United Party, Hulse resigned his standard bearer position and now, he has decided to resign from the UDP, ending 27 years of his life in electoral politics.

Hulse, who earned the nickname “Flippin,” due to his constant use of the word, made the announcement this morning on the Love FM Morning Show, where he appeared as a guest.

In the July recording, Hulse was brutally critical of PM Barrow’s spending of Petrocaribe dollars on the July 8 by-election in the Dangriga constituency, following the resignation from the House of Representatives of the PUP area representative Hon. Ivan Ramos.

Hulse, under threat of legal action from PM Barrow for some of the allegations that he made in the recording, quickly retracted his statements and his unsigned letter of resignation from his post as UDP standard bearer was processed at the UDP headquarters within days of the recording being made public.

Hulse, however, did not disappear into the sunset after he resigned; he supported the candidacy of Nathan Young in the convention to replace him. Young, while making a good showing, however, lost to Walter Garbutt, who was elected as UDP standard bearer for Stann Creek West.

This morning Hulse made it public that he is resigning from the UDP out of frustration because he cannot assist his people from within the party structure.

“I never expect the day mi wa come when I had to say, as of now, as of today, I am officially no member of the UDP party; I resign from the party. And I want to be an independent free thinker… Because when you belong with a party, you are to a degree obligated not to be attacking your organization. Man, if I work for BTL, I can’t be criticizing them. If I work for Love FM, I can’t criticize them. We can do it out there and then they tape and we get in trouble. I have decided that we reach a point that, no reason to quarrel with you anymore, we’re on a different page,” Hulse declared.

Apparently, the straw that broke the camel’s back between Hulse and the UDP was an expansion project involving a sub-division of a large parcel of land in Placencia that was pushed back.

Now, as a free-thinking man, Hulse said, if he sees injustice, he will speak out against it

“It’s never one thing that starts to frustrate you, okay. Not frustrate you, start to make you understand that gradually, even when you are breaking up with your wife and what not, or any breaking up of partnership in business; the divergence start with little things. Eventually, one day you wake up and you realize you’re not on the same page. This is what has happened, steady erosion, erosion,” Hulse explained.

He highlighted the fact that because he was no longer a UDP insider, it became increasingly difficult for him to get help for people in his constituency.

Hulse lamented, “We got no Christmas cheers; we got no Mother’s Day cheers in Stann Creek West. Because, guess what, man, we no happy with Hulse, so 30,000 people, grassroots people, 23 villages, well, tough luck. I have a problem with that – I have an opinion and if we disagree, you are then ostracized, you go to the Ministry and because I am not active in politics, ‘no no no, you’re not in play’. Electricity expansion has been promised for umpteen years. Oh no, no, no, you no inna play.”

“I just need to sensitize my former colleagues that they are running for election and if I see a little injustice going on, they can’t fault me for coming on the media and exposing it, because a lot has happened over the last seven years,” Hulse stated. “The era of personal greed and selfishness, that is the era that we are in,” he went on to state.

Amandala attempted to verify from the UDP Secretariat whether in fact Hulse had indeed submitted his letter of resignation to the Party; however, we were told by the person who answered the phone that she is not the person to give out such information. She referred us to the Prime Minister, who is out of the country at this time.