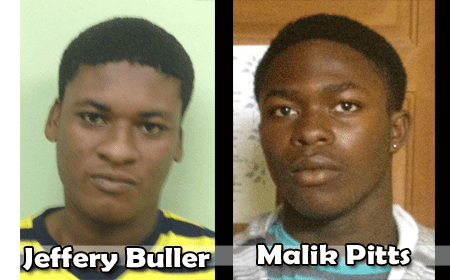 BELIZE CITY, Fri. Dec. 11, 2015–Three out of nine persons who were remanded to prison on Monday, December 7, for their alleged role in a vicious home invasion of Lebanese diplomat, Abou Nahra’s Burrell Boom home, were granted bail in the Supreme Court of Justice Herbert Lord this morning.

This afternoon, three additional persons, charged in connection with the same incident, appeared in the Magistrate’s Court. Senior Magistrate Sharon Fraser remanded two of them to prison, while the third, on the advice of his attorney, Dickie Bradley, will be arraigned on Monday, before the Chief Magistrate.

Randolph Coleman, 23, a Coast Guard officer and resident of Police Street, was offered bail of $10,000 plus one surety.

The conditions of Coleman’s bail is that he surrender all of his travel documents to the Supreme Court, prior to receiving his bail, and that he report to the Queen Street Police Station every Friday, beginning on December 18.

Ashanti Roches, 19, who is facing a charge of handling stolen goods and who was on remand, after the Magistrate’s Court prosecutor objected to granting her and two other women bail at their arraignment, appeared in court today, along with her attorney, Leo Bradley.

Justice Lord granted Roches bail of $3,000 plus one surety in the same amount, and imposed conditions similar to those that he imposed on Coleman.

Crystal Augustine, 23, also appeared for the bail application hearing with her attorney, Anthony Sylvestre, who had made submissions on her behalf during the Magistrate’s Court arraignment, but she was remanded when the Chief Magistrate decided to uphold the prosecutor’s objection to bail for the handling stolen goods charge, which is a bailable offense that is not covered by the Crime Control and Criminal Justice Act that restricts the Magistrate’s Court from granting bail.

In the Supreme Court, however, Augustine was granted bail of $3,000 plus one surety in the same amount. Justice Lord imposed the same bail conditions on Augustine that he imposed on Coleman and Roches.

In addition, the three are to appear in court for every adjournment until their case or cases come to an end.

Less than three hours after Coleman, Roches and Augustine were released on bail, the police van transporting detained persons to the Magistrate’s Court arrived. Three men who arrived in the van did everything they could to conceal their faces from court reporters’ cameras.

Magistrate Fraser read the charges to Buller, who was being represented by attorney Dickie Bradley.

Magistrate Fraser explained to him that the matter is a Court 1 matter and that she was only “facilitating” the arraignment.

After Fraser explained that the Chief Magistrate had remanded other persons charged in connection with the case, Bradley asked the court to put off the arraignment of his client until Monday, when Chief Magistrate Smith would be in her court.

Fraser agreed and Buller was not arraigned on the charge, but remained in police custody.

Pitts and Jex were charged with handling stolen goods.

Police are alleging that Pitts handled a gold ring and a silver ring that were stolen during the home invasion.

In court, Pitts alleged that he was beaten by police and his face was banged against a wall; Magistrate Fraser made a note for the court record.

Jex told the court that police found the items (4 silver rings) in a parking lot.

Today, police confirmed that they are in possession of a digital video recorder (DVR) that was stolen from Sarkis’ home by the men accused of committing the aggravated assault.

Senior Superintendent Edward Broaster, officer commanding Eastern Division Rural, told the media that the DVR is in good working condition and that it had recorded the eight men who had entered the home on December 3.

Broaster said the burglars thought they had disconnected the DVR, and then they stole it.

“We have already taken evidence off it,” Broaster disclosed.

Police said they are also in possession of a black Honda Accord car that they believe was used in the burglary.