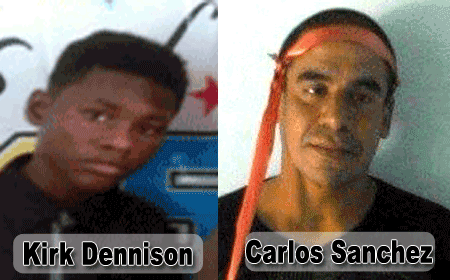 Kirk Dennison was reported missing on January 4. His mother told police that at about 7:30 that morning, Kirk was sleeping in his bed, and she went out, but when she came back home at about 6:30 that evening, he was not at home, and she does not know where he is.

He is described as being of brown complexion and weighs about 120 lbs. He is about 5 feet tall and has a tattoo of the word “MURDER” on his left arm and chest.

Another young man who has been reported missing is Jonathan Dominguez, 18, of Biscayne, who left his mother’s home on Airport Road, Ladyville, on his way to a family friend’s residence in Ladyville, and was last seen on Thursday, February 25, at about 8:00 that night.

At the time he was last seen, Dennison was wearing a white T-shirt with a silver design on the front, a pair of cream-coloured 3/4 pants, and a pair of tennis shoes.

Jonathan Dominguez is about 5 feet 6 inches tall and weighs about 150 pounds. He is of brown complexion, with a low haircut. He is of slim build, and has a small scar at the corner of his left eye.

To date, his whereabouts remain unknown.

Then there is Miguel Rejon, 39, of corner Progress and Cinderella Streets, Orange Walk Town. He left home at about 4:30 on Wednesday, February 24, and since then, he has not been seen or heard from.

Rejon is described as being of Hispanic descent; he has a round face, straight hair, is of medium build and was last seen wearing a pair of long khaki pants and a white T-shirt.

San Ignacio police are also asking for the public’s assistance in locating Carlos Sanchez, 24, who was last seen on the evening of Thursday, March 3, near the CP Gas Station in Santa Elena Town.

He had reportedly been heading home, but did not arrive at his destination. According to family members, Carlos is deaf and unable to speak and stands 5 feet tall.

The last time he was seen, he was wearing a black T-shirt and a pair of long blue denim pants. He was also wearing a pair of khaki shoes.

Carlos Sanchez is a Guatemalan national and was in Belize visiting with his sister. The family has already filed a missing person’s report and is now asking for the public’s assistance in locating him.

Carlos was due to return to Guatemala, today, Thursday, March 10.

Lastly, there is Alexis Cardinez, 15, a secondary school student of Victoria Street, Belize City, who was reported missing by her mother, Arlena Cardinez. She was last seen on Saturday, February 20, wearing a yellow blouse, short light blue pants and a pair of brown sandals. She is about 5 feet 8 inches in height and weighs about 135 lbs. She is of fair complexion and has an oval face with brown eyes and short, black hair.

Anyone who sees any of the missing persons is urged to contact Belize City police or the nearest police station, or call 911, or 0800-922-TIPS.