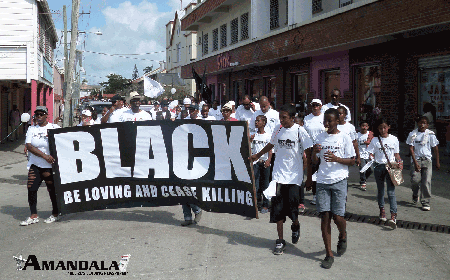 BELIZE CITY, Thurs. Mar. 17, 2016–The Police Department and other organizations, including primary school students, conducted an anti-crime march through the principal streets of the city this morning. The demonstration, called BLACK (Be Loving and Cease Killing), which aims to send a strong message from the police against crime and violence, began at about 8:00 this morning and concluded at about 1:00 in the afternoon, and had the participation of an estimated 5,000 people.

The march began at the Cinderella Plaza and proceeded down Freetown Road, onto Douglas Jones Street, into North Front Street, down Albert Street into Regent Street, and over the Swing Bridge into Queen Street. It then ended at the Princess BTL Park on Newtown Barracks, where a massive anti-crime rally was held.

Inspector Fitzroy Yearwood said that the march was a means to build relationships with the community, and to foster a partnership in the effort to find ways of reducing crime and violence.

He said that it is an opportunity for police to take the lead in this effort, in solidarity with other organizations and businesses.

Yearwood said that many times police empathize and sympathize with relatives and friends of persons who have lost their lives senselessly.

BLACK is a community policing effort and it is a part of the “Not in My City” anti-crime campaign.