Home Features 6 to be decorated with Queen’s Honours
Features

6 to be decorated with Queen’s Honours 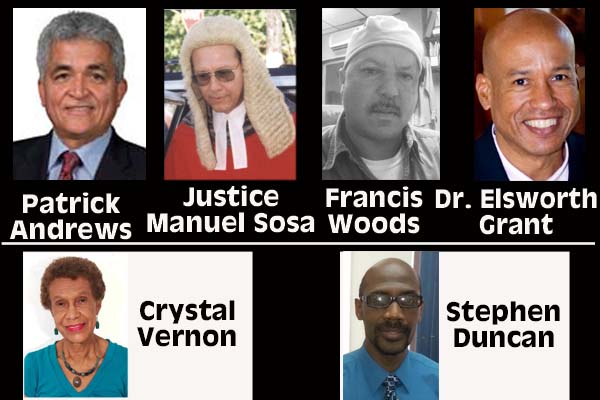 Six Belizeans have been chosen to receive Queen’s Honours, according to an announcement issued this week from the Office of the Governor-General at the Belize House in the City of Belmopan.

The highest-ranking honor for this set of honorees will go to Justice Manuel Sosa OB, CBE, SC, LLB (Hons), president of the Belize Court of Appeal.

This honor in the category of Knight Bachelor will add CMG to his appellations, as Justice Sosa will receive the designation of Knight Companion of the Most Distinguished Order of St. Michael and St. George.

The Court of Appeal Justice, who was born in Corozal Town, was called to the Bar in 1976. Sosa has been in the legal profession for the past 38 years, and his award comes in acknowledgment of his contribution to the Judiciary – one of the three branches of government.

After a decade in the profession, Justice Sosa rose to the rank of Senior Counsel, after which he served for another decade as a member of the Belize Advisory Council (1987 to 1997).

He first sat on the bench in 1993 as a temporary Justice of the Supreme Court, and his formal and permanent appointment to the Supreme Court came in February 1998, when Sosa left private practice. That same year, he received Queen’s Honours and received the designation of Commander of the Most Excellent Order of the British Empire — CBE.

The second honoree is Dr. Ellsworth R. Grant, the oncologist who founded the Belize Women’s Wellness Foundation in Los Angeles and cofounded the Belize Cancer Center in Dangriga, who will receive the designation of CBE, to be an Ordinary Commander of the Civil Division of the said Most Excellent Order of the British Empire, for his contribution to medicine.

Dr. Grant grew up in Dangriga and attended Ecumenical High School before migrating to the USA. He studied medicine at the University of California in San Diego, and has also lectured at the Los Angeles County-USC Medical Center.

Crystal Vernon, who originates from Orange Walk Town, is the wife of the principal librarian at the Belize National Library and Information Service, Larry Vernon.

Before being employed by Belize Estate, she taught at Holy Redeemer Primary School and worked as secretary to the principal of the Belize Teachers’ College.

She has held various voluntary positions with the Belize Bible Society Board, the Leomar School of Dance, the Belize Women for Cultural Preservation, and the Belize Association of Administrative Professionals.

“Crystal has always enjoyed being involved in Belize’s community life and culture, and in 1975 was a founding member of the Belize Women for Cultural Preservation, which years later evolved into the popular carnival group C-JAMM,” her bio says, adding that the “C” stands for Crystal.

Woods spent his childhood life in Maskall Village before moving to Belize City in 1983. In 1994, Cisco survived a major plane crash and spent 10 months in the hospital surviving 2nd and 3rd degree burns to most of his body. This experience transformed his thinking and helped him to set new priorities in life.

Woods started working with Cisco Construction in 1989, and became supervisor/project manager for various construction projects around the country. In 2000, he helped to form the Kolbe Foundation.

Ten years later, in 2010, he started to restructure a project originally designed to maximize the use of equipment with only 40 employees, into the street infrastructure project that eventually came to employ over 600 women and men, most of whom were considered unemployable.

We were able to speak with Duncan, who shared with us snapshots of his accomplishments.

Duncan told us that he has been in banking for the past 37 years. He started out doing clerical work at Barclays Bank, serving in the Eastern Caribbean for 11 years during the course of his tenure with the bank. After 25 years at Barclays, which then became First Caribbean International Bank, he served another 6 years before opting for early retirement upon the death of his wife.

For the past 6 years, Duncan has served as the managing director of Heritage Bank in Belize City. Apart from his professional career as a banker, Duncan has also been active in Methodist social groups and sports – particularly competitive football. He has also done volunteer work with the Youth Hostel and the National Committee for Families and Children.

“I started off at Prisoner Creek, Lake I, and think that is important to get across: No matter what part of the country you come from, you can make it!” said Duncan, whose most recent milestone is becoming the founding president of the Belize Bankers Association, inaugurated last October.

At the time of this report, we had not received the biographical profile of Andrews which we had requested via his office.

The date for the formal presentation of awards is yet to be announced.

What the Queen’s designations mean

Knight/Dame: This is awarded for having a major contribution in any activity, usually at national level. Other people working in the nominee’s area will see their contribution as inspirational and significant, requiring commitment over a long period of time.

Officer of the Order of the British Empire (OBE): This is awarded for having a major local role in any activity, including people whose work has made them known nationally in their chosen area.

Member of the Order of the British Empire (MBE): This is awarded for a significant achievement or outstanding service to the community. An MBE is also awarded for local ‘hands-on’ service which stands out as an example to other people.

(The honor and award system is explained in full at this web link: https://www.gov.uk/honours/types-of-honours-and-awards)