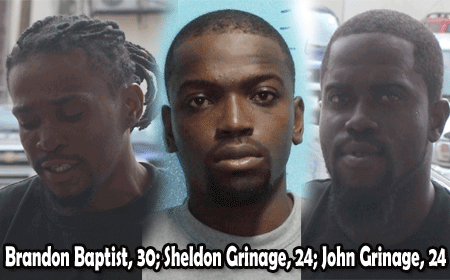 BELIZE CITY, Mon. Dec. 7, 2015–The scene around the Belize City Magistrate’s Court this morning appeared almost cinematic, as family members and friends of six men crowded in front of the court building, waiting all morning for police to bring them to court, while inside the court’s holding area, three women who were charged with the men sat down waiting.

Around the perimeter of the court, heavily armed police officers from the Rural Rapid Response Team took up positions, but when the morning ended, there was no arrival of the men accused of the brutal home invasion in Burrell Boom of Lebanese Honorary Consul, Sarkis Abou Nehra, 77. 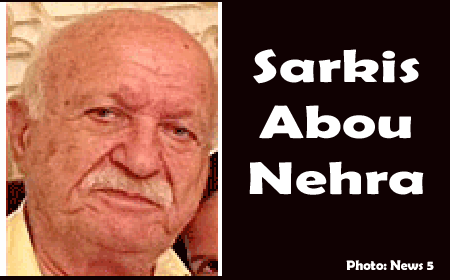 The incident reportedly occurred between last Thursday night and early Friday morning. Nehra was not in the country, but his caretaker and his caretaker’s wife were at the residence. The caretaker was severely beaten and his wife raped by one of the eight intruders, who all wore masks, police initially reported.

As the lunch hour approached, the three women, who avoided being photographed by court reporters by covering their faces, were shuttled back to the police station. All nine accused persons would be brought back for the court’s afternoon session.

The arraignment would take place before Chief Magistrate Ann Marie Smith, giving court reporters another opportunity to photograph the accused.

While the detained men were being escorted into the courtroom, Tyrone Meighan struck the freelance court reporter Roy Davis, sending him sprawling on the steps of the court.

One reporter went upstairs to lodge a complaint with Chief Justice Kenneth Benjamin, and it was not until the hearing was almost over that reporters were finally allowed inside the courtroom.

Chief Magistrate Smith apologized, telling the reporters that she had not been aware that they were outside.

The three women — Kamisha Cacho, Crystal Augustine and Ashanti Roaches — were arraigned on a single count of handling stolen goods. The court prosecutor objected to granting them bail on the ground that the police are still conducting an investigation into the case. 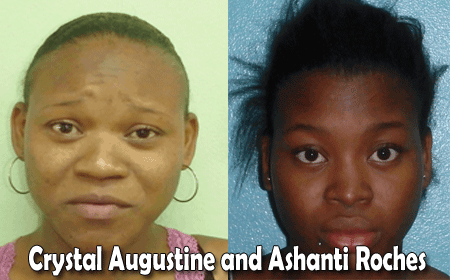 Attorney Anthony Sylvestre, who represented Crystal Augustine, made submissions to the court, telling the Chief Magistrate that the offense of handling stolen goods is a bail-able offense and that his client is not a flight risk.

Smith, however, remanded the three first-time offenders into custody, saying, “Bail is denied on the grounds that the investigation is still ongoing and the defendants might interfere with prosecution witnesses.”

The three women were remanded until their next court date on January 14, 2016. 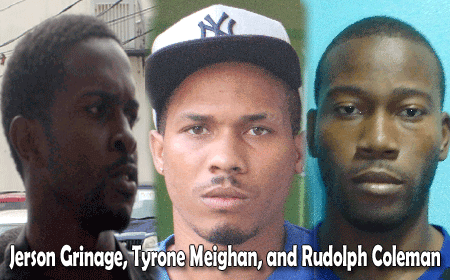 All six men were remanded to prison until their next court date on January 14, 2016.

In late October, Tyrone Meighan, Brandon Baptist and Orel Leslie were acquitted of the November 23, 2012 murder of former BDF soldier James Noralez in a trial by judge without jury.

Justice John “Troadio” Gonzalez, in acquitting the men, had ruled that the evidence produced by the Crown was circumstantial and could not secure a conviction.

Noralez’s body was found at the junction of Faber’s Road and the George Price Highway riddled with bullets.

At a press brief this morning at the Ladyville Police Station, police said that the Lebanese Consul’s home was invaded by 8 armed bandits, between 8 p.m. Thursday night and 3:00 a.m. Friday morning. The bandits stole $10,000 worth of jewelry, three 9mm pistols, a .22 automatic rifle, and two 12-gauge pump action shotguns. They also stole US$1,500.

The gunmen, after tying the caretaker of the compound and beating him, (in the course of which his wife was raped by one of them) then went to Abou Nehra’s house, which they ransacked and burglarized. They then escaped in the Consulate’s vehicle, a Mercedes Benz bearing diplomatic license plates. Abou Nehra and his family were out of the country at the time of the home invasion.

The caretaker and the woman were taken to the Karl Heusner Memorial Hospital, where they were admitted in a serious but stable condition. They were later released after they were treated. .

The caretaker told police that they were held captives until almost 3:00 Friday morning.

Police launched an intense investigation and operation which led to the arrest of the six men and three women who were charged in the Magistrate’s Court today.

Police said that the group are members of two gangs from Belize City, which are the Ghost Town and the Police Street gangs.

The Rural Police High Command reported that the gunmen gained entry into the compound by trickery. One man who was well- dressed went to the gate requesting assistance, and when the caretaker opened the gate, the man entered the compound and immediately held up the caretaker with a gun.

The rest of the home invaders then went into the compound through the gate, and after tying up the caretaker and his wife, the men then searched the dwelling area of the caretaker, where tools were found which were used to gain entry into the home of Abou Nehra. 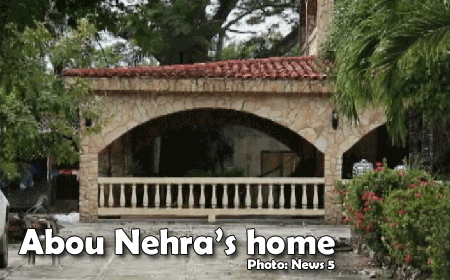 Police said that the gunmen were in Abou Nehra’s house for about 5 hours, during which they ransacked the whole house and stole various items belonging to Nehra. A safe was destroyed after they cut it open to steal what was inside.

Senior Superintendent Edward Broaster, Commanding Officer of Belize District Rural Police, said that on Thursday during the day they were conducting operations on the Philip Goldson Highway when they stopped a car with two suspects in it. Nothing incriminating was found in the car and it was allowed to proceed, however.

The two persons were known gang members from Belize City, said Broaster. He said that later that evening they were seen again in Ladyville, and the Strike Team began to look for them, but could not find them.

Broaster said that they had initiated various programs in the Ladyville area, including People Personal Protection, a system in which the police call a householder’s phone or cell phone and depending on the response of the householder, the officers might decide to visit the residence to check that all is OK. He said that police made a call to the housekeeper at Nehra’s home, and she responded that she was in church.

That answer made them concerned, and police immediately went to the mansion to check on the couple, and that was when they found the couple, who told them what had happened.
Broaster said that they then began to stop vehicles and search them. Police found the Consulate’s car abandoned on St. Joseph Street in Belize City at about 6:00 Friday morning.

On Saturday night, police stopped and searched a vehicle in front of Blues Bar in Ladyville, and the two men from Belize City, whom they were looking for, were in the car. The car was searched and items reported stolen from Nehra’s house were found.

Police immediately detained the two men and after interviewing them, four more men were detained in Belize City, along with the three women. Broaster said that things began to fall in place, and the case was basically cracked. The men and the women were all arrested and charged, and police are looking for more suspects.

Broaster said that on Thursday night prior to the home invasion, a policeman who was on patrol in the area had stopped some men, who told him that their vehicle was having mechanical problems. He had not sensed anything suspicious about them and he continued his patrol.

The Commanding Officer had reported that they had strong evidence to charge one of the men, Tyrone Meighan, with raping the woman, but that relatives of the accused had been disputing the allegation, and demanding that DNA analysis be done. Superintendent Hilberto Romero had said that specimens had been taken from the men and had been submitted to the forensics department for analysis.

This is not the first time that the home of Sarkis Abou Nehra has been violently invaded. On Tuesday, December, 6, 2005, between 1:00 and 2:00 a.m., a group of 4 men gained entry into his home while he was at home sleeping. He was awakened by the noise in his house and saw two bandits, who fired at him, and he returned fire, but they escaped from the house empty-handed. Nehra, for his part, was shot in his arm.       Police had recovered 16 expended shells from inside Abou Nehra’s home, 13 of which were fired by the attackers and three of which were fired by Abou Nehra.

Police arrested and charged Giovanni Lauriano, Anniver Palacio, and Kenrick Reneau with two counts of attempted murder and one count of grievous harm in connection with that incident.

The charges were reinstated in February, and Lauriano was again charged jointly with his two partners, and they were remanded to prison.

In court, however, the case fell apart and the three men were released.  Three of the men are now deceased.

Police said that many of the stolen items have been recovered, but the stolen guns have not yet been found. They are seeking the public’s assistance in recovering the guns — three 9mm pistols, 2 shotguns and a .22 rifle. Anyone who knows the whereabouts of these firearms or has information that could lead to their recovery is urged to contact the nearest police station, or the Ladyville Police Station, and they will receive a reward.

Broaster said that they will be rolling out several programs to keep citizens safe.