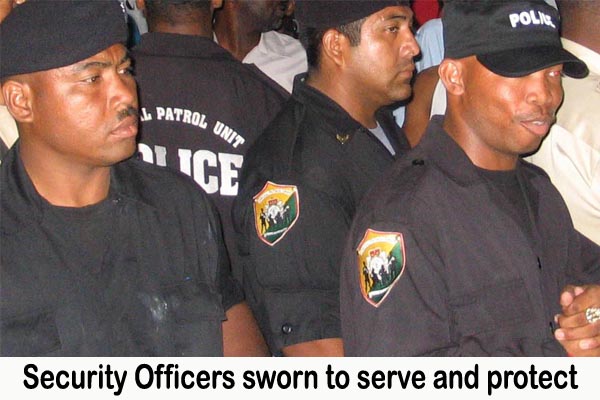 Time and again, there are citizen complaints of abuses by security officers whose duty it is to uphold the rule of law and to protect citizens from threats to their personal safety. However, a report released this week by the US Government highlights concerns over abuses committed by Belize security forces—and points out that, “Authorities failed at times to maintain effective control over the security forces.”

“Investigations continued into three deaths in police custody, in which police allegedly used deadly force under questionable circumstances,” said the report, released by US Secretary of State, John Kerry.

The Office of the Ombudsman regularly receives such reports, and as Amandala has previously reported, they are at the top of the list of complaints lodged by the public.

“The government occasionally ignored reports of abuses, withheld action until the case had faded from the public’s attention, failed to take punitive action, or transferred accused officers to other areas within their department. The Ombudsman’s Office stated it received numerous complaints of police abuse and that the public continued to fear the Gang Suppression Unit (GSU),” the report detailed.

The Human Rights Report notes that the Professional Standards Branch (PSB) of the Police Department, charged with investigating complaints against police, received 120 formal complaints of alleged police misconduct as of September.

“The PSB continued to receive complaints against the BPD’s GSU. The media reported several incidents of police using excessive force, including at least two involving the GSU,” said the report.

“There were widespread allegations of police refusing to respond to complaints and using excessive force,” the report stated.

“It added that a tour guide required brain surgery after tourism police allegedly beat him in Caye Caulker in January. Police allegedly forced tourists who recorded the incident to destroy the footage. The police’s internal investigation remained incomplete as of October,” it said.

As is the case with many major crimes, the rate of conviction is low – and even in those cases, the convictions were really for lesser infractions, not for the major ones.

The report goes on to note that Prime Minister Dean Barrow has had to discipline two of his ministers for improper behavior.

It added, though, that while “there was some impunity for high-ranking officials,” that “many lower ranking officials faced disciplinary action and/or criminal charges for alleged abuses.”

The most important human rights abuses included the use of excessive force by security forces, lengthy pretrial detention, and harassment and threats based on sexual orientation or gender identity, the US report said.

It added that the United Belize Advocacy Movement (UniBAM) – the group which is challenging Belize’s law which criminalizes unnatural sexual intercourse, including sodomy – had reported multiple physical attacks and harassment of members of UniBAM’s board of directors and other members of the LGBT community and their family members.

“There were marches against the sexual orientation portion of the [Revised National Gender Policy] RNGP throughout the country, often with hundreds of citizens participating. One march featured a figure hanging from a noose with the name ‘UniBAM’ inscribed on its chest. One gay-friendly protest was organized during the year, in response to opposition to the RNGP. Organizers rescheduled a transgender fashion show due to concerns over the public’s possible adverse reaction. In the context of the public controversy over the RNGP, the Prime Minister and his wife separately gave public remarks in support of equal rights for all, the first time such remarks were made by high-level public officials,” the Human Rights Report pointed out.

The US Government notes that Human Rights Reports are produced on all countries receiving assistance and all United Nations member states, and those are presented to the U.S. Congress in accordance with the Foreign Assistance Act of 1961 and the Trade Act of 1974.