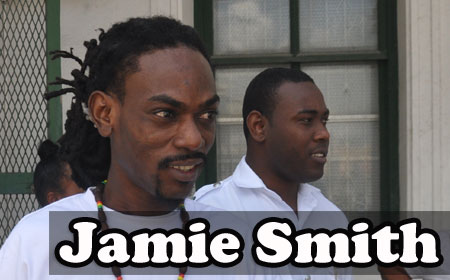 BELIZE CITY, Mon. July 13, 2015–The trial of Jaime Smith, 28, who has been accused of the double murder of Eric Arana, 19, and Dwayne Tillett, 21, which occurred on May 20, 2011, ended in the Supreme Court of Justice Adolph Lucas this morning when the judge, who heard the case without a jury, ruled that Smith was not guilty of the double murder.

The prosecution, Justice Lucas said, had not sufficiently identified the accused as the man who pulled the trigger, killing Arana and Tillett and injuring three others, one of whom was the key prosecution witness but was later declared a hostile witness after he had failed to show up to give his testimony on the second day of the trial.

On the night of May 20, a group of friends were socializing on Antelope Street when a lone gunman rode up on a bicycle and unleashed a barrage of gunfire at the group.

Five persons sustained gunshot injuries from the shooting. One man, Eric Lip Arana, died on the spot. The other man, Dwayne Tillett, died about half an hour later while undergoing treatment at the Karl Heusner Memorial Hospital.

Arana was shot at least eight times. He suffered gunshot injuries to the abdomen, chest, arm, back and buttocks. Dwayne Tillett was shot in the chest and side of the back.

Khiry Haulze, the key prosecution witness, was shot in the buttocks. Juvanna Gillett and Karen Rivers were also injured in the shooting.

When Khiry Haulze, the prosecution witness who had given two statements to police, had failed to return to court to give his testimony, Justice Lucas issued a bench warrant for him, and when he was eventually located, Haulze took the witness stand and told the court that he did not recall giving a statement to police.

Crown Counsel Portia Staine, who led the prosecution evidence, made an application to have Haulze leave the witness stand so that the prosecution could have established proof that he had given the statements to police, which implicated the accused man as the person who fired the fatal shots on the night of May 20, 2011 that claimed the lives of Arana and Tillett.

When Staine made the application for Haulze to leave the witness stand, Smith’s attorney, Bryan Neal objected, telling the court that the prosecution knew that their witness was a troublesome witness.

Neal told the court that the prosecution was “playing hop-scotch.”

In granting the application, Justice Lucas said that having Haulze leave the witness stand was inevitable so that the prosecution could prove the statement.

The prosecution then made an application to have Haulze further remanded pursuant to the warrant of apprehension. Justice Lucas, however, offered Haulze a $10,000 bail. Haulze was unable to post bail, so he had to remain in police custody until he finished giving his testimony.

Haulze’s testimony, however, did not assist the prosecution’s case because he told the court that he did not remember almost anything that he allegedly told police in the statements.
In his summary of the evidence this morning, Justice Lucas determined that the prosecution had failed to properly identify the accused.

In terms of the lighting conditions that night, the statement of Haulze was contradicted by the evidence of the scenes of crime technician, who said there was only one light at the end of the street, Justice Lucas said.

Justice Lucas added,” Haulze was not there at all. He fled. He ran, taking shelter.”

“Haulze appeared to me as not being an honest witness”, Justice Lucas said, before finding Smith not guilty of the double murder.

Neal told Amandala, “The prosecution had an eye-see witness and in a police identification parade, that eyewitness picked out my client.”

“However, once we examined the crime scene by way of other witnesses and by way of the scenes of crime technicians, that eyewitness could not have seen what he said he saw in the statement that he gave to police,” Neal explained.

Asked what defense he relied on to convince the judge that his client was innocent, Neal replied, “This was basically a case of mistaken identity.”

Neal said that the prosecution’s hostile witness, Haulze, admitted in court that he was shown a photo of his (Neal’s) client and it was on that basis that he was able to identify Smith at the police identification parade.

Smith gave a statement from the prisoner’s dock, telling the court that he was at home when the shooting occurred and perhaps that alibi also contributed to the judge’s not guilty decision, Neal said.