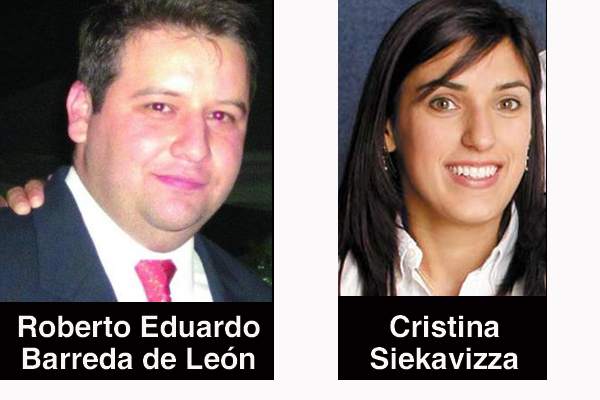 Roberto Eduardo Barreda de León, 37, the son of a prominent ex-judge in Guatemala and the prime suspect in the high-profile mystery murder of Cristina Siekavizza, a Guatemalan mother and wife who disappeared more than two years ago, will be facing trial in Guatemala for her murder.

Why is this story relevant to Belize? Multiple media reports coming out of Guatemala indicate that Barreda, who had assumed a false identity with a fake passport, had received his documents and financial support via Belize.

In fact, one news report goes further to say that Barreda had actually been traveling back and forth between Mexico and Belize – even while Interpol had him on their most wanted list.

Barreda had reportedly changed his identity to Carlos Roberto Barreido Villareal and had papers claiming he was a Mexican citizen.

He was captured in Merida, Mexico around mid-day last Friday, November 8, when he went to pick up his two children from school, and was deported to Guatemala on Saturday, November 9.

He reportedly absconded from Guatemala on August 4, 2011, with Roberto Jose, now 9, and Maria Mercedes Barreda, now 6. The children were also traveling with him using false identities.

Guatemalan authorities had issued a warrant for his arrest on charges of violence against women, obstruction of justice, and murder, or femicide.

Barreda de León was wanted for the alleged murder of his wife, Cristina Siekavizza Molina, on July 6, 2011, but he reportedly fled Guatemala a few weeks after Cristina’s disappearance. Her body has still not been located.

Guatemala authorities suspected foul play because of reports from a housekeeper indicating that blood evidence was being removed from the home. Barreda had reportedly led the children to believe that their mother had gone off with a lover.

Guatemala’s Ministerio Público reported back in February that an important outcome of the investigation was the arrest of a former president of Guatemala’s Supreme Court – Beatriz Ofelia de León (Roberto Barreda’s mother), following declarations made by Petrona Olga Say Velásquez (the domestic worker at the Siekavizza residence). De León later faced arrest on the charge of obstruction of justice.

Meanwhile, Interpol was on the hunt for Barreda – who had not only changed his name but his appearance and hair color to stay below the radar.

Guatemalan authorities offered a reward of 50,000 quetzales (US$6,000) for information on Barreda’s whereabouts.

Barreda was arrested in Paraíso Maya, Mérida, Yucatán, México, on Friday, November 8, when he showed up at his children’s school to pick them up. An apprehension order and extradition request had been issued a week earlier, on November 1.

Fundación Sobrevivientes of Guatemala said that roughly 25,000 people were helping to track Barreda via social media. Guatemalan authorities credited the Facebook group – “Voces por Cristina” – for tipping them off about Barreda’s location. The suspect was reportedly tracked using his cell phone’s GPS feature.

Belize’s Ambassador to Guatemala, Alfredo Martinez, told Amandala that although Guatemala’s Prensa Libre carried a story in which it stated, in the story’s caption, that Barreda got his immigration documents in Belize, the body of the article said nothing to substantiate that claim.

“What we do know is that he was in Merida using a fake Guatemalan passport and a fake name,” Ambassador Martinez confirmed.

He told Amandala that Barreda entered Mexico as a Guatemalan citizen—not as a Belizean citizen.

He said that a news article had indicated that Barreda had connections with a well-known Guatemalan lawyer, now dead, who knew Belize well and who used to take money to him, channeling it through Belize. However, there were no details provided to indicate whether the funds were sent through a bank or through a third party.

Ambassador Martinez told Amandala that during the initial stages of the search for Barreda, Guatemala had sought Belize’s help in locating him, and wanted posters were posted at Belize’s northern and western border.

It has been suggested that Barreda may have avoided detection by using the Commercial Free Zone in Corozal as a conduit.

There was a report last year that Barreda may have been seen in Corozal, but when authorities checked into the report, they weren’t able to find anything concrete, Martinez said.

As for allegations that Barreda has been moving to and fro through Belize, receiving money, Ambassador Martinez said that whereas there have been reports of that nature in Guatemala, nothing has been said officially on the matter, other than that he had been found in Mexico.

Roberto and María, who were removed from Barreda’s custody in Mexico, are reportedly back home in Guatemala, in the care of their maternal grandparents, Juan Luis Siekavizza and Angelis Molina.