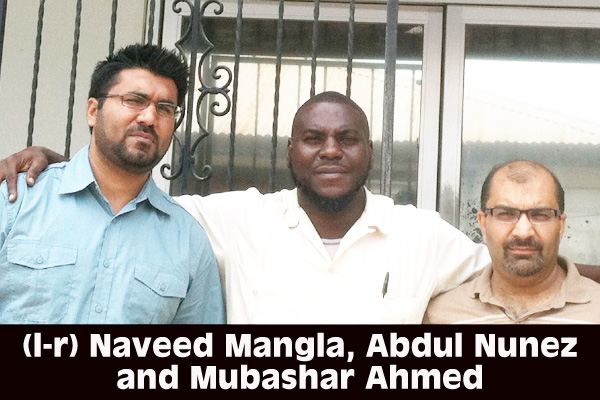 Naveed Mangla, a missionary of the Ahmadiyya Muslim community, told Amandala that his group, established in Belize 6 months ago, plans to set up an arm of Humanity First in Belize.

The organization says that it is a humanitarian relief organization, registered in 41 countries across 6 continents. It said that it has been working on human development projects and responding to disasters since 1995.

Mangla moved to Belize from Canada last year. Also with him when he visited our newspaper on Tuesday were his colleagues, Mubashar Ahmed, also of Canada, and Abdul Nunez, a Belizean who joined the group when they came here last year.

The Ahmadiyya group said that they are different from the Muslims already established in Belize because they are the only ones who believe the promised reformer has come. That promised reformer, Mirza Ghulam Ahmad of India, fulfills the second coming of Muhammed, said Mangla.

However, he told us that, “When we serve people, we don’t connect the Ahmadiyya with Humanity First.”

He said that Humanity First is working for the sake of the Almighty, just to help people.

“Our plan is to remind people that whichever religion you belong to, if you take a U-turn and go back to your founder, you will find peace,” Mangla said. “None preached hatred, killing or any of these crimes going on in the world.”

As for their plans for work in Belize, Mangla said, “We don’t want to make big promises and not live up to them. We have only been here for 6-7 months and we are trying our best to first register…”

The group of men had just returned from a trip to Guatemala, where they said the community is established and working with locals to teach English, Spanish and computer science.

Mangla could be assigned to missionary duties only after attending seminary for 7 years at the University of Theology in Canada. Similar institutions exist in England, Africa, India and Pakistan.

Mangla said that they study not only Islam but all other religions, so that they can relate to other people.

Ahmed, his comrade, told us that they have had a great experience interacting with Belizeans. He said that they have found Belizeans to be very attentive, as people would listen and talk to them – which they don’t see in other countries, because people simply don’t have time. Last year, 9 people joined the community and they quickly registered with the help of a local attorney.

The men said that members of their community spend a lot of time doing volunteer activities, and their mantra is “love for all; hate for none.”

They are involved in running soup kitchens, cleaning parks and roads, and visiting the elderly, the men said.

They told us that their group numbers tens of millions, with large populations in Pakistan, Indonesia and India.

Ahmed said that they don’t just stay in the mosque and pray but they help people.

“We are here in Belize to stay, to help our Belizean brothers and sisters…” Ahmed said.

“Everything in life has a purpose and we are here for a purpose,” Mangla commented.

Nuñez, a well-known Muslim in Belize, said that he has heard negative things about the Ahmadiyya from some other Muslims in Belize; but, he said, “…don’t beat the horse until you ride it. Find out before you flag it…”