Home Headline Alberto and Melvin plotted against me: Delroy
Headline

Alberto and Melvin plotted against me: Delroy 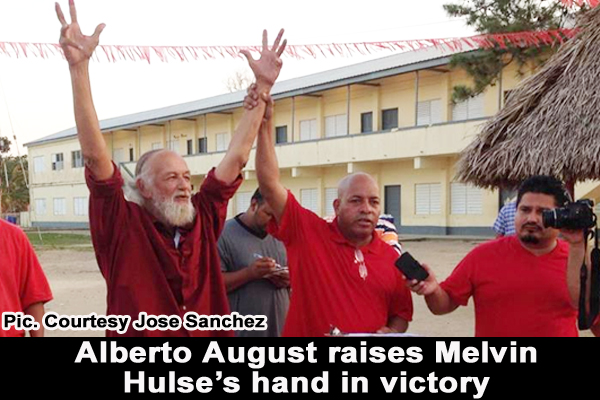 Cuthkelvin has publicly blamed UDP chairman Alberto August and former minister Melvin “Flippin” Hulse, for colluding to illegally manipulate the voters’ list to ensure that he, Cuthkelvin, did not stand a chance in the convention.

Cuthkelvin made a decision to boycott the convention hours before it was supposed to be held due to what he classified as a “fraudulent” voters list that he could not stomach.

In a press release dated Saturday, March 15, Cuthkelvin’s committee stated that at an emergency meeting which took place the day before, on Friday, March 14, Alberto August insisted on using a “block-out” voters list of just under 900 electors which, according to the committee, was fraudulently compiled in collusion with him, August, and Hulse.

The release declared that Cuthkelvin decided to boycott the convention – which was held yesterday at Independence Village – and issued a call for his supporters to refrain from attending or voting at the convention. The committee’s release concluded by calling on UDP Leader, Hon. Dean Barrow, “to intervene, find an objective arbitrator to resolve the issue, and set a new date for the convention.”

That request, however may have been to no avail, as the convention rallied on yesterday in the absence of Cuthkelvin.

Today, Amandala spoke with the political aspirant while he was preparing for a meeting in Hopkins with his committee, and he told us that he would not rest until he gets the attention of his party.

Cuthkelvin confirmed that he indeed boycotted the convention because of the “fraudulent” list of 895 voters which the party chairman and Cuthkelvin’s opponent, Melvin Hulse, came up with because he was not privy to that list prior to the convention, which, he understood, would have been an open convention.

“To participate in the convention would be to validate an illegitimate process”, Cuthkelvin emphasized.

He explained that last Tuesday, March 11, all 3 candidates – including himself, Hulse, and Alexander Romero – held a meeting chaired by August in which they went over a strike-out list to extract the names of known PUP supporters. Cuthkelvin said that the list was shaved down to 200 plus voters who would not be eligible to cast their votes in the convention.

However, he explained that he became uneasy on Wednesday evening after he had called the Chairman and found out that the list actually had in excess of 800 plus persons whose names were not presented to him the day before.

Cuthkelvin said that after receiving a portion of that list, he found it unacceptable that he was not allowed to vet all the names.

He then requested a meeting to finalize the list last Friday, March 14, because he wanted someone other than August to preside over the meeting, but that was not the case. Cuthkelvin told us that he walked out of the meeting after realizing that August was going to be the one chairing the meeting; he made up his mind then that the only way to get justice was to boycott the convention, after which he sent the relevant correspondence to the party secretariat, who then forwarded it to the media.

Cuthkelvin says that the list violated party protocol. He has not yet gotten a response from the leadership of his party on the matter, and after meeting with his committee today, will decide what to do later this week.

He mentioned that he will not rest until the party listens to the concerns of his committee, and accused the party chairman of undermining the democracy of the party.

Earlier today, August said that the issue is an “internal party matter,” and so, they are dealing with the matter internally.

We also spoke with the winner of the convention, Melvin Hulse, who seemed unperturbed, and he told us that necessary groundwork with his grassroots constituents won him the right to contest once more as the UDP standard-bearer for Stann Creek West.

Hulse explained that there always has to be a winner and a loser in all conventions, and although he did not engage in publicizing his campaign, he was able to work with his people and gain the victory because the voters understood that he is adequately willing and able to address their needs.

He said that he doesn’t know anything about additional people being put on the voter’s list, because he doesn’t bother with the list.

According to Hulse, of the over 8,000 voters in Stann Creek West, his biggest outpouring of support was from the southern villages such as Placencia, Seine Bight, Alta Vista, Santa Cruz and Mango Creek.

Of the 2,134 ballots cast, 10 votes were rejected. Melvin Hulse secured 1,223 votes; the other contestant, Alexander Romero, got 882 votes while Delroy Cuthkelvin, who maintained that he did not mobilize voters because of his gripe with the convention, still got 19 votes.