Alleged robbery of truck and $60,000 leads to human trafficking case

There are more questions than answers

However, instead of returning with the vehicle and the money, that employee, Keyur Barot, 23, fled the country. Barot allegedly met up with his colleague, Jitendra Kumar, 29, and they both headed into Guatemala, where they abandoned the vehicle.

Guatemalan authorities have since returned the vehicle.

On September 23, Barot and Kumar were seen in Mexico. Mexican officials intercepted them with US $13,000 in their possession, and returned them to Belize in October. They have not yet faced any charges, however, because according to our sources, they alleged that they were the victims of human trafficking.
We were told that they were in protective custody by the Department of Social Services. The men allege that Charles had treated them inhumanely, and underpaid them.

Today, Assistant Superintendent of Police and Commander of the Crime Investigation Branch (CIB), Alejandro Cowo, confirmed that the case involving Barot and Kumar began with a theft investigation. However, given the allegations of human trafficking, police quickly began to collaborate with the Immigration Department, as well as the Human Services Department. 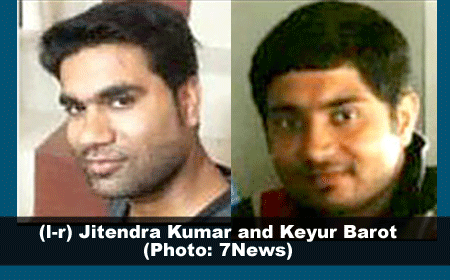 Cowo told the press that the men were not being held in any protective custody, as Amandala had learned. According to him, the Immigration Department will investigate the complaints of human trafficking and thereafter, police will commence their investigation into the theft.

However, when Amandala spoke to the Director of the Immigration Department Diana Locke today, she told us that the matter was not related to Immigration.

When the press asked if there was any deadline for laying charges, Cowo said that there was none in place, given that the case of theft was an indictable offence.