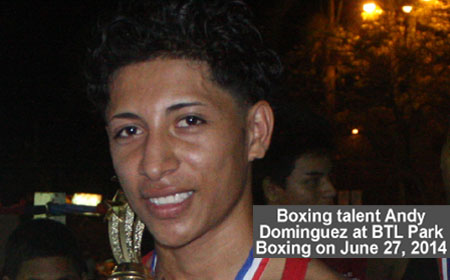 BELIZE CITY, Thurs. Mar. 5, 2015–Not much activity has been taking place in boxing on the local scene. Boxing cards are few and far between. Like football players in training, what boxers in training want are bouts, events where they can test themselves and be motivated to develop their skill.

There have been some technical arguments going back and forth regarding the functionality or effectiveness of the present Belize Boxing Federation and its president Moses Sulph, a well known community spokesman and activist, who is also a former president of COLA.

In Belize we have a saying, “Pick sense from nonsense.”

Whatever the arguments, whatever the technicalities involved, one thing is incontestable – the brightest boxing prospect in Belize right now is 18-year-old Andy Dominguez, who happens to be trained by Cayo Lions Den manager Frank Martinez.

At this sports desk, we believe in Belizean excellence, and we have witnessed that on more than one occasion from young Mr. Dominguez. As some say, “The sky is the limit” with this kid.

According to reports, Sulph’s Boxing Federation has announced plans to send two Belize City based boxers who are 10 years older than Andy and in heavier weight classes to the Pan American Games later this year. Those Games are once every four years, and are qualifying games for the Summer Olympics 2016.

Indications are that Sulph now seems to have a problem with Martinez, a former Federation executive member, and whose gym has the best record in Belize boxing cards. And Andy might be a victim.

Sulph’s problem with Martinez seems to be concerned with Martinez taking boxers across the border to Guatemala and to Mexico to fight without first seeking permission from the Federation.

Sulph is quoted by Channel 5 as saying that, “They went out to have events in Mexico, and it clearly states that you cannot be associated with any professional boxing federation that is not under the national federation, and that is what Mr. Martinez did. He went out, took some boxers and they competed in a pro bout, which is totally prohibited by IBA regulations and guidelines.” He continued, “…at no time, under my leadership… will we tolerate anything that is going to… jeopardize us losing our affiliation to IBA.”

For his part, Martinez maintains that he received a private invitation to take his fighters to participate in events in Peten and Chetumal, and Dominguez fought in an amateur preliminary.

“If someone invites you to an event, there is no measure within the constitution that says you can’t go to that event. There’s no infraction….

There is a lot that needs to be ironed out in this boxing situation.

At this sports desk, we are not counting out President Moses Sulph yet. But we are reminded of days long gone, before semipro, when the bogeyman of “amateur status” was used by local sports bureaucrats to keep ambitious young footballers “in their place.”

Hopefully, egos can be put aside, and humility can trump authoritarian tendencies so that something can be worked out in time to get Andy on that ticket along with the two other boxers to Toronto. Four years is a long time for an aspiring young athlete to wait.