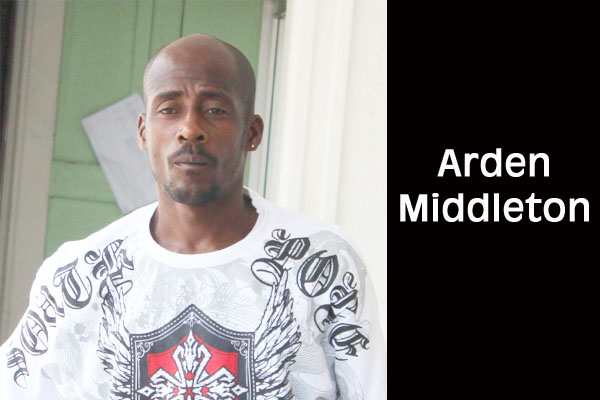 Middleton was accused of having sex with a girl, 14

This evening a jury of nine men and women deliberated for just over three hours before finding Arden Middleton, 39, guilty of carnal knowledge of a then 14-year-old female student.

According to the minor, on July 13, 2011, she was supposed to have gone to summer school, but instead, she decided to “play hooky” and went about her own business.

According to her testimony, she wandered about aimlessly until she arrived at Little Wilt’s shop on Caesar Ridge Road.

She testified that she was sitting outside the shop and asked to use the bathroom some time afterward. She said that, as she was going to the bathroom, which is located at the back of the shop, Middleton followed her, and she never made it to the bathroom.

Instead, she says, Middleton guided her to a bed and had sex with her. The minor, who said she was a virgin when the incident occurred, told police that the entire act lasted just about one minute. She said that she pushed Middleton off of her because she was in pain, and after doing so, she left and went to a mechanic shop she normally frequents when she is truant.

Later that day when the child went home, her mother approached her and told her that there was a complaint about her stealing money from the mechanic shop where she had been. Her mother told her to strip off her clothes so she could search her for the money and that is when the mother noticed blood on her panties and confronted her about having sex.

The minor initially denied having sex, but eventually told her mother that she had engaged in a sexual act and that it was Middleton, who she knew as “Gads”, with whom she had had sex. The mother decided to confront “Gads” and according to the mother’s testimony, “Gads” offered to pay for the child’s tuition and also offered to build them a house.

The minor was then taken to the Human Services Department, and thereafter, taken to a doctor to be examined. That examination was done the following day, on July 14, 2011, and the doctor certified that the child was carnally known and that she had a fresh tear which indicated that she had had sex within the last 24 hours.

However, under cross-examination by Middleton’s attorney, Bryan Neal, the doctor admitted that after concluding his examination, he could not determine if that sexual encounter was the minor’s first sexual act. He also indicated that at the time of the sexual encounter, the minor was on the last days of her menstrual cycle.

Middleton, in his sworn testimony, told the court that on the day of the incident, he wasn’t even at the shop. In fact, according to him, he was all the way on the other side of the city on the Northern Highway at Hulse Place.

When the jury returned their unanimous guilty verdict, Middleton’s face beytrayed shock. He then hung his head in disbelief.

Justice John “Troadio” Gonzalez decided to defer sentencing until April 18, 2013, giving Middleton time to prepare his mitigation and present witnesses to speak on his behalf.