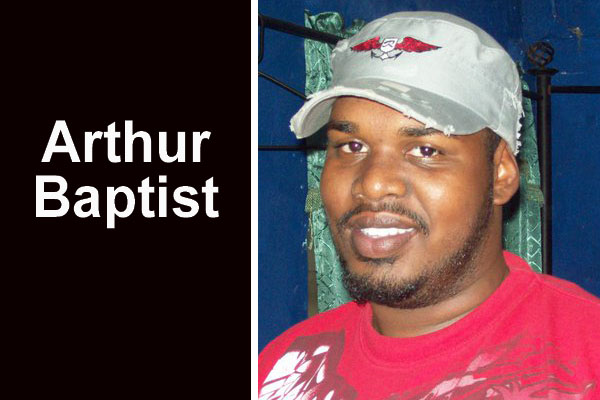 Arthur Baptist, 25, who was shot in the head on June 1, 2013, and given a 5-percent chance of survival by doctors, survived for three months before finally succumbing to his injuries.

Baptist, of Neal Pen Road, died at his home at about 6:30 on Thursday evening, September 5, after enduring a lot of pain. He was taken to the Karl Heusner Memorial Hospital morgue for a mandatory autopsy to certify the cause of his death.

Doctors who examined Baptist reported that the shot fired into his head split on impact inside his brain, and they had given him a 5% chance of survival. Baptist was released from the hospital within a month, but as a result of the injury, he was paralyzed and confined to a wheelchair. He also was unable to talk.

Police reports are that about 8:00 Saturday evening, June 1, they went to the Karl Heusner Memorial Hospital Emergency Care Unit, where they saw Baptist suffering with gunshot wounds to the left side of the head and Arthur’s uncle, Melvin Baptist, 44, was seen with a gunshot wound to the back of the head. Melvin was discharged from the KHMH and has been recovering at home.

After a preliminary investigation, police learned that at about 7:20 that Saturday evening, June 1, both men were sitting in Baptist’s barber shop, located at #7 Neal Pen Road, when two men on separate bicycles rode up to the shop and fired several shots at them, and escaped.

After processing the scene, police retrieved seven 9mm expended shells. Both men were rushed to the Karl Heusner Memorial Hospital, where they were admitted to ward in a critical condition. Police have launched an investigation to find the two gunmen, who are now wanted on charges of murder.

However the suspects continue to elude police.