Assassins out, BDF in 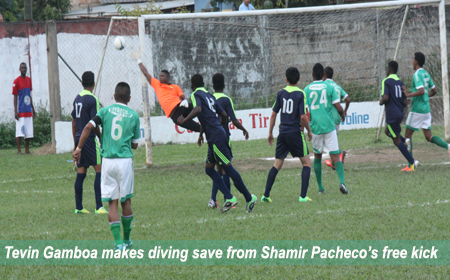 BELIZE CITY–After the last regular season games ended in a draw yesterday at the Norman Broaster Stadium in San Ignacio, BDF clinched the final spot in the 4-team playoffs of the Premier League of Belize Opening Season 2014-2015. Despite their 6-2 victory the previous night over Wagiya in Independence, Placencia’s Texmar Assassins saw their playoff hopes dashed when the final whistle blew at the Norman Broaster Stadium with BDF gaining the extra point from a 0-0 draw against Verdes FC, who finished at the top of the standings.

Three games were scheduled for Saturday night. At the People’s Stadium in Orange Walk, a convergence of unfortunate circumstances resulted in FC Belize losing their second consecutive game by default. As the home team playing out of Orange Walk, the small FC Belize contingent reportedly got caught in the traffic jam caused by the annual Love FM parade in Belize City, and were therefore late in arriving for their 7:30 appointment with Belmopan Bandits, who won the game by default, thus securing the third playoff spot. Meanwhile, at the Isidoro Beaton Stadium in Belmopan, it was already playoff bound Police United, 6-1, over visiting San Ignacio United; and at the Michael Ashcroft Stadium in Independence, Texmar Assassins gained an essential 6-2 victory over Wagiya. (Game stats have not yet been received from the league secretariat.)

The win on Saturday put the Assassins in a position to make the playoffs, depending on a Verdes win over BDF on Sunday. (See the standings below.) But it was not to be; BDF held Verdes to a scoreless draw in regulation, and they thus claimed the fourth and final spot in the upcoming playoffs.

The playoffs take a double round-robin format, with games scheduled for Sundays and Wednesdays, with no break for the holiday season.

Opening playoff games match #1 seed vs #3 seed, and #2 seed vs #4 seed; so that should have Police United hosting Belmopan Bandits on Saturday at Isidoro Beaton, and Verdes hosting BDF on Sunday at the Norman Broaster. The official schedule will be out later this week.