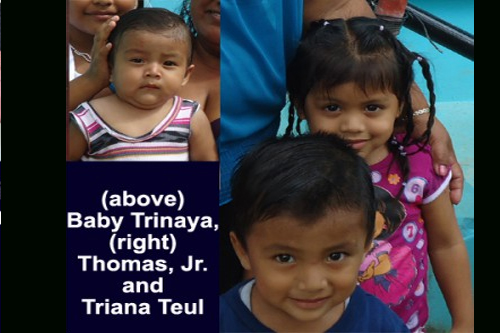 An autopsy conducted on the three children, Trinaya Felicia Teul, 1, Thomas Teul, 3, and Triana Teul, 4, who were found dead in the sea in the Belizean Beach area after supposedly being drowned by their mother, Felicia Chen, reportedly determined the cause of death to be “Immersion Syndrome.”

Survivalworld.com describes “Immersion Syndrome” as being caused by “prolonged exposure to wet conditions at temperatures from 50 degrees F to 32 degrees F (10 degrees C to 0” C).”

The autopsy was conducted on the bodies of the three babies on Monday, April 29, by police coroner Dr. Mario Estradabran at the morgue of the Karl Heusner Memorial Hospital.

The children died about 12:30 p.m. on Saturday, April 27, when, according to police, their mother, Felicia Chen, 22, took them into the sea in the Belizean Beach area and drowned them. The babies were recovered from the sea and taken to the Karl Heusner Memorial Hospital, where they were pronounced dead on arrival about 1:30 p.m. that Saturday.

Police arrested and charged the mother with triple murder for the deaths of her children, and took her to the Belize City Magistrate’s Court on Monday, April 29. The court on Tuesday ordered that she be remanded to a psychiatric ward for observation for 14 days, after which she is to be returned to court.

The three children will be buried on Friday, May 3, after funeral services at Holy Redeemer Church at 2:00 p.m.; their bodies will be taken to church at 1:00 p.m.