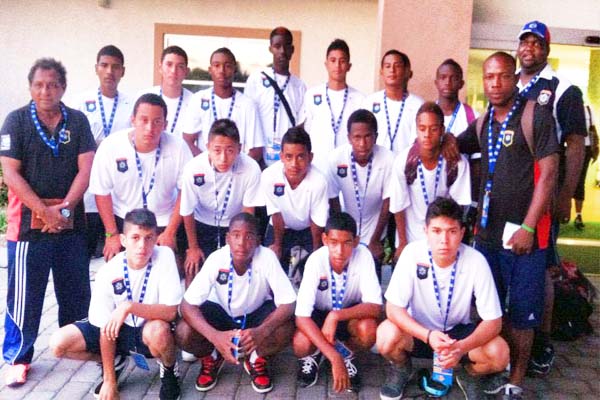 If we are to judge what would be the level of Belize’s performance in football competition on the international scene in the years to come based on the recent achievement of the “Baby Jaguars,” then we can say that Belize’s football future looks very bright at this point in time.

The Belize Male U-15 National Football Team, affectionately known as the “Baby Jaguars,” returned home today after an impressive showing in the CONCACAF U-15 Championship that was recently held in the Cayman Islands. The team finished second in their group after losing only once to the only undefeated team in their group, Guatemala. However, the Baby Jaguars made an unprecedented achievement in U-15 CONCACAF competition, and ended with a remarkable record of 3 wins and 1 loss. Belize finished the tournament in commendable fashion with a total of 9 points, scoring 10 goals and allowing 3. The goal scorers were Randy Augustine, who netted 4 goals; Alvin Sifontes, who scored 3; and Mark Samuels and Rene Leslie, who scored 2 and 1, respectively.

Their astounding participation and strong sportsmanship in the CONCACAF tournament earned them a chance to watch the championship game that was played on Sunday, August 25, between Honduras and Guatemala. They arrived back home after 1:00 p.m. on Monday, and were greeted at the Philip S.W. Goldson International Airport by their loved ones and members of the media.

Shortly afterwards, the team members were taken on a motorcade through the principal streets of Belize City and then to the Radisson Fort George Hotel, where a press conference was held so that the players and officials could discuss their experiences during the tournament.

Renan Couoh, FFB’s Technical Director and the team’s Head Coach, said that the tournament was a great experience for the young “warriors,” who did a great job of executing their strategy. He said that he believes that they represent the future of football in Belize. Couoh mentioned that they played four official games, and each game was tough; but the group’s philosophy was to play a game where they are relentlessly offensive but equally defensive. He also said that he thanks and appreciates the Belizean people in the Cayman Islands for the great support they received. Couoh also thanked the FFB for making the trip possible and for working to develop football in Belize.

Sergio Chuc, FFB’s Senior Vice President, said that the focus of the FFB will be on the youths because he said, “We know that with what we have here we can go far.”

The team’s Assistant Coach, Alex Noralez, also spoke, saying that the reception they received while in the Cayman Islands was very good. He told the media that speed and teamwork was the strength of the young team, who only had 6 weeks to prepare. In the game against Guatemala, he believes that the team was being studied, because the Guatemalans used their own strategy against them. At first, they were not sure how to respond; but when they did, they got chances to score, but unfortunately they didn’t capitalize.

Some of the players who spoke to the audience said that they had a good time in the Cayman Islands, and they still feel happy, despite not making it to the semifinals. They also said that they learned a lot from the experience, and acknowledged that the accomplishment was made through teamwork.

Ruperto Vicente, President of FFB, told the media in an interview that it is the first time that they have sent a U-15 team to play internationally, and the team has done extremely well. He also reiterated that the FFB is now planning to put a greater focus on youth development by investing most of their time and resources on young players like these.

The FFB promised to keep the team together for an upcoming UNCAF U-16 tournament between Central American countries that is to be held later this year in Belize on November 16th-24th.