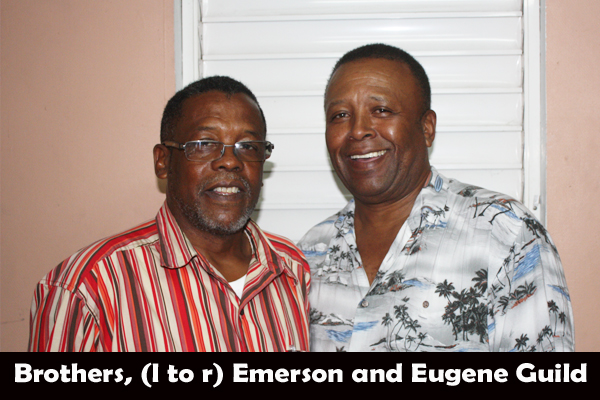 Last Thursday night, Eugene “Japanese Bomber” Guild, on a short visit from New York, stopped by the sports desk on his way to a guest appearance on Tony Wright’s Thursday night show on KREM Radio, Belize Musicians Past and Present. Gene was accompanied by his older brother Emerson, still resident in Belize, who was also a member of the famous Berger 404 champion team of the mid-1970’s. Another footballer turned musician, Emerson is known in the Jewel for his “Singers and Players of Instruments” promotions.

We did an in depth interview with Gene on a previous visit back in October of 2012, where he explained that, after he had retired from playing competitive football in New York due to an injury in 1984, he eventually stumbled into a new career in music, singing to be specific.

Covering a wide genre of music, Gene indicated on Thursday’s show that he is considering an appearance with his band at the next Belize Sound Fest, if things can be worked out.

Best wishes to our former adversary on the football field in his present music career, and we look forward to that appearance on Belize Sound Fest 2014.