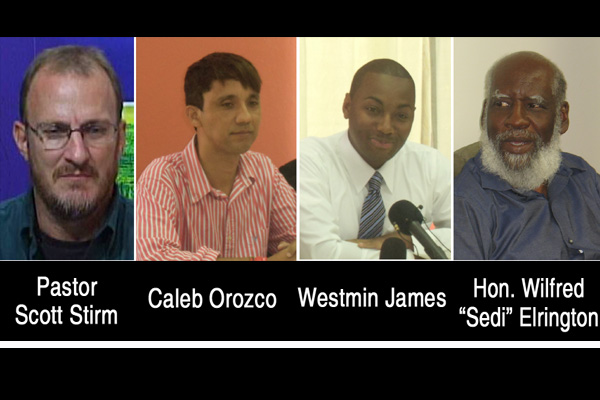 UNIBAM says homosexual acts should be decriminalized; Belize Action says section 53 should not be changed

Today, Tuesday, May 7, a landmark constitutional challenge brought by Caleb Orozco, United Belize Advocacy Movement (UNIBAM) executive president, against the Attorney General of Belize in regard to section 53 of the Criminal Code, will be heard in the Supreme Court of Belize.

The case has led to a heated contention between the churches and the claimant, Orozco. We spoke to Director of Belize Action, Pastor Scott Stirm, yesterday, who had announced that Belize Action, its supporters and members of the churches were planning a gathering for an awareness rally last night in the Supreme Court parking lot.

Stirm had said they were asking that all concerned citizens be present at the event. The primary activities which they planned as part of the event included a brief presentation on the core issues which underscore the case and its importance, as well as a session for prayer and worship.

“Basically the position of Belize Action is we’re saying to the changing of section 53, our sodomy and natural act laws, we’re going to agree together against the changing of these laws,” Stirm said. “The primary reason why we feel so strongly is the law they’re saying is a violation of their human dignity, personal privacy and human rights has never once been used to prosecute any case for any consensual act but it has been used repeatedly over and over for sexual abuse,” he went on to say.
Pastor Stirm said they see section 53 as a good law and it should not be changed. He added that sodomy is not a fundamental human right.

“We believe in respect, we believe in human rights; homosexuals already have human rights — they’re humans,” he said. “If those rights are not being enforced, if police are not enforcing the proper laws, if there is any kind of bias, then there are proper procedures for dealing with that. But changing section 53 is not the answer to what they claim is a problem,” he added.

Yesterday, Monday, Orozco held a press conference. He told the press that section 53 should be decriminalized, and all individuals should have the right to participate in sexual activities that take place between consenting adults and furthermore, section 53 should protect the dignity and fundamental rights and freedoms of all Belizeans, not violate them.

“For far too long the state has ignored the LGBT (lesbian, gay, bisexual, transgender) citizens’ fundamental rights and freedoms,” he said. “The value of this thing is that it removes the justification of the state by omission or indifference to resist addressing the issues of fundamental rights and freedoms of its LBGT citizens. That, to me, is core. It removes the reason why the state should not address issues that are directly impacting the community,” Orozco went on to say.

Orozco had at his side at the press conference, Westmin James, lecturer at the University of the West Indies Cave Hill Campus and member of the Faculty of Law UWI Rights Advocacy Project (U-RAP).

James did most of the speaking at the press conference, and a part of his opening remarks was his assertion that section 53 infringes on Orozco’s constitutional rights. Those rights, he said, are the rights to privacy and human dignity.

“There cannot be anything more private than what goes on in one’s bedroom, between consenting adults and [it] should not be the state’s responsibility to criminalize that,” he said. “Dignity simply means one’s human worth should be in fact recognized,” he said, arguing that the legislation did not respect the human dignity “of segments of Belize – that being homosexual men and persons of the LGBT community; it simply enforces prejudice around this historically disadvantaged group in society.”

Pastor Stirm, however, told us that changing section 53 will mean that the homosexual lifestyle will become integrated into the education system and will significantly change the traditions and morals that have been taught ever since Belize became a nation.