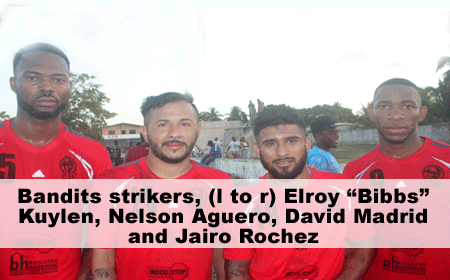 BELIZ CITY, Mon. Mar. 27, 2017–It’s hard to describe it any other way, what transpired yesterday evening at the MCC Grounds, in the Premier League of Belize (PLB) 2016-2017 Closing Season Week 10 clash between home standing Belize Defence Force FC (BDF) and visiting, undefeated, defending champion Belmopan Bandits SC. City fans have grown to expect a certain level of performance and competitiveness from the BDF squad, although the majority of regulars still look at FC Belize as their favorite city team. Going into the weekend, BDF was ranked #2 in the standings, while the struggling FC Belize had just managed to climb into the #5 position in the race for one of the top-4 berths in the playoffs. But city fans were terribly disappointed, as the home team fell, 4-0, in a rather one-sided affair.

The talk, going into yesterday’s game, was that BDF had revamped its coaching staff, previously led by Jerome “Je Je” Serano; and there were suggestions that the new head coach, Erick Gongora, would provide more needed discipline among the young players on the team.

It is a risky move, though sometimes necessary, to change coaching staff mid-season; and, while sometimes there are immediate negative consequences, it could still pay off down the road in a positive turnaround for the team. Police United FC coach, Aaron “Gambis” Gamboa recently boasted on the Press Cadogan Show, that he had “benched” star midfielder/striker Harrison “Cafu” Roches, due to his inadequate attendance record at training. And Cafu was outstanding the following week, scoring in the Police United 1-1 draw with the Bandits in Belmopan. But yesterday, benching star striker Trimayne Harris, and a number of other changes to their starting line-up, backfired miserably for BDF, and the team’s performance against the Bandits was quite disappointing to city fans, who last them draw, 2-2, with FC Belize back on March 1.

It was already 2-0 in first half, before BDF brought Trimayne Harris and Brian Martinez into the game in second half; and by then the demoralized BDF squad was struggling to find an effective strategy against the midfield domination of the Bandits, orchestrated by their midfield genius, Denmark Casey. For the first goal at the 13th minute, BDF goalie Tevin Gamboa gave away a free kick at the top of the eighteen, as he inadvertently stepped across the line before a kick-out; and Bandits’ decoys broke to the right of the BDF defensive wall, drawing their attention, and opening a space on the left side, for veteran sharp-shooter Elroy “Bibbs” Kuylen to guide his left foot delivery though the open space and into the left corner, while BDF goalie Gamboa was covering the right side. The second goal, at the 26th minute, came after Gamboa had dived to push-out a hard shot from the left side by Kuylen, only to have Bandits’ midfielder Nelson Aguero send a right-away shot between two defenders, who obscured Gamboa’s vision, as the ball bounced into the open net. The Bandits added 2 more goals in the second half, a header by Jairo Rochez at the 82nd minute, after Gamboa had repelled a shot by Aguero; and another header by advancing midfielder Jerome “Jarro” James at the 87th minute, after a left-side center by Jairo Rochez saw right wing David Madrid’s effort blocked by Tevin Gamboa, for the 4-nil final score. 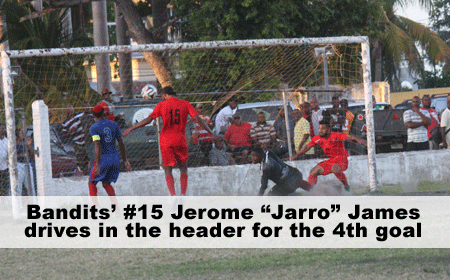 With the loss, BDF drops to 4th place in the standings, because of the results in other Week 10 games yesterday. Meanwhile, according to early reports, at the Norman Broaster Stadium, home standing Police United prevailed, 2-0, over Placencia Assassins with goals from Jalen Myers (33’) and Devon Makin (82’); at the Carl Ramos Stadium, Verdes grabbed the 1-nil win over home squad Wagiya, on a goal by Marlon Molina (26’); and at the Victor Sanchez Union Field in Punta Gorda, Ashton Lewis (56’) gave visiting FC Belize the lead, but veteran Wilmer Garcia (86’) equalized for P.G.’s Freedom Fighters, and it ended in a 1-1 stalemate.

After a road game this coming weekend, the BDF squad will finish the Closing Season with 3 consecutive home games at the MCC. Hopefully, by then the BDF management will have ironed out the kinks in their game strategy, as well as in their gate hospitality to our media personnel and disabled past players, who were shown “no love” on Sunday.
FC Belize will be returning to the MCC this Sunday to host the Placencia Assassins. It will be the last home game in this Closing Season for FC Belize, as they and the Assassins are battling to keep their playoff hopes alive. (See standings below.) 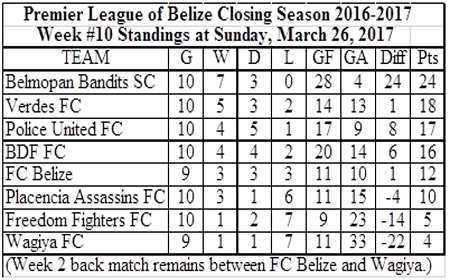