Bandits on a roll, Police scoreless in 4 outings 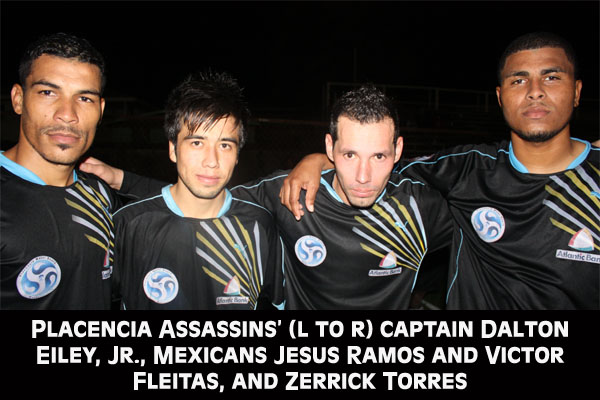 What a difference a week makes! Just last week Wednesday, when our newspaper hit the streets with the Week 7 updates on the Premier League of Belize (PLB) Closing Season Tournament, defending champion Belmopan Bandits was trailing Belize Defence Force (BDF) in the standings, and Police United was still entertaining strong hopes of making it to the playoffs once more.

A lot has changed in this past week, when the PLB introduced the first of two sets of mid-week encounters to try and complete the current regular season in time for the CONCACAF Champions League draw, where the Open and Closing regular seasons aggregate winner will get to represent the Jewel.

There were Week 8 mid-week games last Wednesday and Thursday, March 27 & 28, then the Week 9 weekend games on Saturday and Sunday, March 30 & 31, and last night and tonight there are the Week 10 games. So that, since our last report, three sets of games have occurred. And the biggest item of note in those games is the re-entry onto the Belizean football scene of the nation’s number one striker, Deon McCaulay. Fortunately for Belmopan, and unfortunately for all other PLB teams, the rumors have materialized, and Deon has donned the Bandits uniform and unleashed his goal scoring fury upon all would be contenders.

The man is on a mission. And, from watching him operate against Police United last night at the MCC, one gets the feeling that Deon is determined to prove to foreign scouts that they made a big mistake, and if he gets the chance at the Gold Cup and/or the Champions League, he will want to make some people sorry for their disrespect. In the Bandits’ 3 games over the past week, Deon has scored 7 goals, which probably puts him among the leading “goleadors,” despite missing the first 7 games of the season.

In Week 8 games last Wednesday, visiting Belmopan Bandits dropped Verdes, 3-1, at the Marshalleck Stadium with 2 goals from Deon McCaulay (24’ & 61’) and the other from Jerome “Jarro” James (82’); while Julian Maldonado (88’) scored for Verdes. And at the Norman Broaster Stadium, it was Belize Defence Force, 1-nil, over San Ignacio United with Harrison Tasher (53’) getting the game winner.

Week 8 continued on Thursday, March 28, with visiting Placencia Assassins crushing Police United, 3-0, at the MCC Grounds with goals from Victor Fleitas (26’), Zerrick Torres (29’) and a penalty from captain Dalton Eiley, Jr. (64’PK). Meanwhile, up north at the People’s Stadium, it was visiting FC Belize, 2-1, over FC San Felipe Barcelona with goals from John King (43’) and Cristobal Gilharry (59’). San Felipe’s only goal was by Deris “Colombia” Benavides (54’).

For Week 9 there were two games on Holy Saturday, March 30. Here at the MCC Grounds, FC Belize dropped Police United, 2-nil, with goals from Leon “Lem” Jones (20’) and Michael Hernandez (75’). And down south in Placencia, it was a 1-1 draw between the home squad Placencia Assassins and visiting Belize Defence Force. Byron Usher (26’) put the visitors in front in first half, but Delone Torres (90+’) got the equalizer for the Assassins in injury time.

Week 9 games continued on Sunday, March 31, at the Norman Broaster Stadium with home standing San Ignacio United getting the 3-2 win over a game Verdes FC. Shaking the net for San Ignacio were Seannon Defour (26’), Leonard Valdez (39’) and Garret Bermudez (60’); while Verdes’ goals were by Nahjib Guerra (47’) and Emmanuel Martinez (78’). And at the People’s Stadium, it was Belmopan Bandits shutting out the home squad FC San Felipe Barcelona, 3-nil, with 2 goals from Deon McCaulay (15’ & 33’) and 1 from David Trapp (44’).

Week 10, another set of mid-week clashes, had 2 games last night, Wednesday. Out west at the Marshalleck Stadium, home squad Verdes FC turned back visiting Placencia Assassins, 2-nil, with goals from Humberto Requena (11’) and Rodney Torres (65’). Meanwhile, here at the MCC, the Belmopan Bandits rolled into town and proceeded to dismantle the struggling Police United, 4-0, in front of their home fans, with Deon McCaulay netting a hat trick (56’, 68’ & 85’) and Jerome “Jarro” James (17’) getting the other. It was the Bandits’ third consecutive victory, while Police are on a 4-game losing streak where they have failed to score a single goal.

Week 10 was completed tonight with both games drawn 1-1. At the Norman Broaster Stadium, Leon Jones (38’) gave visiting FC Belize a 1-nil lead over BDF, but Marlon “El Matador” Meza (90+’) equalized for the army in injury time for the 1-1 final score. And up north at the People’s Stadium, the visitors again, this time San Ignacio United, took a first half lead on a strike by Rosny Martinez (17’), but Clifton West (70’) struck back for home standing San Felipe Barcelona to salvage the 1-1 draw.

The only consolation for cellar dwelling Police United, aside from also having a back match with FC San Felipe Barcelona, is that they still have a mathematical chance at one of the 4 playoff spots in this regular season. But with the Bandits, BDF and FC Belize in commanding positions at Week 10, and 4 weeks of regular season games remaining, it looks like a real dog-fight among the others for the remaining playoff berth.