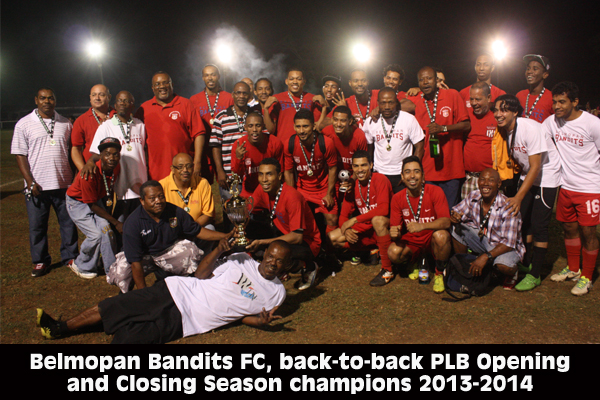 As expected, football fans were treated to a high intensity match at the Isidoro Beaton Stadium on Saturday night, May 17, where Game 2 of the Premier League of Belize Belikin Cup 2013-2014 Closing Season Finals featured home squad Police United, sporting a 3-nil deficit from Game 1, going against the Opening Season champion Belmopan Bandits, who were determined not only to win the 2-game series, as they were expected to, but to prove that they were the better team, and deserving of a trip to the CONCACAF Champions League, the major prize in this tournament.

From the “opening bell,” Police was on the attack, showing for the first time a 3-forward offense, much like the Bandits had done the previous week, featuring Clifton West, Harrison “Cafu” Roches and an unusual starter, Lennox “Criminal” Castillo, who created a number of scoring opportunities for his teammates. Striker Danny Jimenez started at left midfield, but he was very much a part of the frontline attack. For their part, the Bandits reverted back to the traditional 2-forward set with “twin towers” Elroy “Bibbs” Kuylen and Jerome “Jarro” James, who had both played splendidly in the 3-0 win the previous week.

Police attacked furiously in first half, but many of their shots were off target. These included shots wide or high by Danny Jimenez, Cafu Roches, Andres Makin, Jr., and Byron “Barrow” Usher, as well as dangerous headers by Trevor “Burger” Lennen and Clifton West that resulted in spectacular diving saves by Bandits goalie Woodrow West. The Bandits also had a couple decent looks, a header by Jarro James that went wide and a left foot shot by Jarro that was also off the mark. But they had opted for the safer route with the traditional 4-man midfield.

Still searching for a goal, Police made their first two substitutions within the first 10 minutes of second half, bringing in midfielders Amin “Tacos” August, Jr. for Cafu Roches, and Luis “Baca” Torres for Devon Makin. The Bandits responded with a single substitution, veteran midfielder David Trapp replaced Shane Armstrong. And the game played on, with the Police attack bolstered by some fine runs from Danny Jimenez, a few good long serves into the eighteen by captain Andres Makin, Jr., and some skillful penetrating dribbling by Criminal Castillo, creating a few good chances, but no Police player was able to put the ball in the back of the Bandits’ net.

After weathering the Police attack storm for 30 minutes in second half, the Bandits utilized their second change, sending in the veteran midfielder Ernest Wiltshire to replace stopper Erick Rodriguez. Police immediately countered with their last change which may have backfired, as they took out Criminal, who had been a major catalyst in their attack, in favor of Jeremy Bermudez. Two minutes later, it was the Bandits that got on the scorecard, as a low left foot blast from the top of the eighteen by Elroy “Bibbs” Kuylen was almost saved by Police goalie Keith Allen, only to have his own hand inadvertently flip the ball backwards across the goal line – 1-nil, the Bandits at the 80th minute.

That was indeed the “nail in the coffin” of any Police hopes for a miraculous comeback, as their prepared fireworks suddenly rocked the air in the stadium, symbolically conceding defeat, and causing referee Christopher Reid to temporarily halt play until the fireworks were stopped.

Still taking no chances, Bandits coach, (and former national team coach) Leroy Sherrier Lewis made his last substitution at the 84th minute, relieving goal scorer Bibbs Kuylen with young David Madrid. And that pretty much sealed the deal; 1-nil, Bandits over Police, to complete the sweep for the PLB championship.

Nevertheless, the Police team and their “Best Coach” Hilberto “Hilly” Muschamp have nothing to be ashamed of, as they played exciting, attacking football; they will have the off-season to work on improving their execution in the goal scoring department.

In the post-game award ceremonies, previously announced individual awards for the regular season, along with the Playoff MVP award, were handed out by FFB President Ruperto Vicente and Vice-President Sergio Chuc. There were no cash prizes, only trophies and medals, for this Closing Season, but if all goes according to plan, back-to-back champions Belmopan Bandits FC will get to represent Belize in the upcoming 2014-2015 CONCACAF Champions League tournament.