Bar vexed with Barrow over Awich! 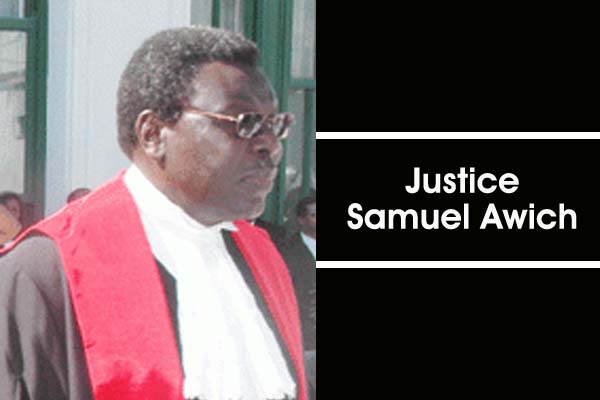 Bar had objected to Justice Awich’s appointment to Court of Appeal; now, PM Barrow wants him there “until retirement”

The Bar Association of Belize called a special meeting on Monday, June 2, at which members passed a resolution which suggested that there may be “an appearance of bias” on the part of Justice of Appeal, Samuel Awich, in his ruling on the constitutional challenge to the nationalization of Belize Telemedia Limited (BTL) and the Belize Electricity Limited (BEL).

Justice Awich, 67, who retired from the Supreme Court bench, was appointed on a two-year contract to sit on the Court of Appeal. His contract expired around the time that his judgments on Belize Telemedia Limited and Belize Electricity Limited were delivered by the President of the Court, Justice Manuel Sosa.

The Bar resolution said in part that “…on the said 15th May, 2014, the Court of Appeal delivered a decision in an important constitutional case relating to the nationalization of Belize Telemedia Limited and Belize Electricity Limited in which the lead decision for the majority in favor of the Government was written by Justice Awich, and on the 19th May 2014, the Prime Minister wrote to the Leader of the Opposition advising that he intended to propose that Justice Awich be appointed as a Judge of the Court of Appeal until he reaches the age of retirement [75].”

The resolution went on to state that “…the Association is very concerned that the above sequence of events gives rise to a real likelihood of an appearance of bias, which tends to undermine confidence in the independence of the Judiciary in Belize.”

The Bar stressed that it was only four days after Justice Awich delivered his judgments on BTL and BEL that PM Dean Barrow offered him an appointment to sit on the Court of Appeal until he reached retirement age, 75, despite the objections of the Bar.

After pointing out that “… the Association has in the past made recommendations to the Government to address the security of tenure of Court of Appeal judges, which recommendations have been entirely ignored….,” the resolution went on to state that, “the Bar Association of Belize does not support the proposed appointment of Justice Samuel Awich to the Court of Appeal.”

The president of the Bar Association is Eamon Courtenay, S.C.