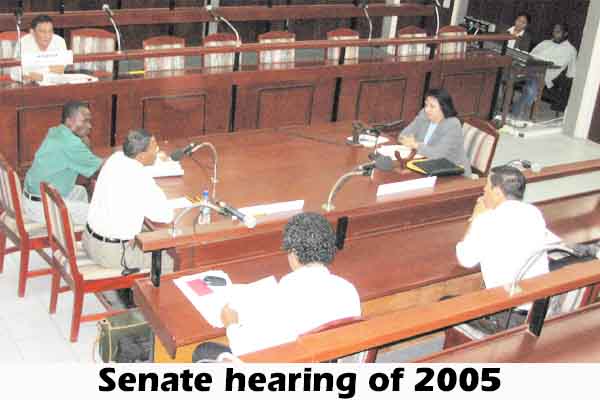 The Senate inquiry into Social Security financing schemes, held back in 2005, under the administration of the Opposition People’s United Party (PUP), demonstrated to the country of Belize that the upper house of Parliament has more power than merely rubber-stamping bills handed to them by the politicians in the lower house of Parliament. With the ruling United Democratic Party’s rise to power in 2008, a manifesto promise was made to install a 13th Senator, to be appointed from within the NGO community; but the ruling party has since reneged on that commitment, on the claim that doing so would result in paralysis in the Legislature.

The refusal of the Government to bring into effect a provision in the Constitution which would pave the way for that appointment was highlighted recently when a motion by the PUP, calling for a Senate investigation into the passport and visa scandal, failed because the ruling party—which holds 6 of 12 seats, voted against it, and the President of the Senate voted in alliance with the ruling party. Had the 13th Senator been appointed, the outcome would have been different.

Speaking on that observation Wednesday, Prime Minister Dean Barrow said: “I don’t agree that there ought to have been a different outcome. We’ve made that plain. The Auditor General has gone in [to the Immigration Department to investigate]. Senator Hulse as Leader for Government Business in the Senate has said, ‘Hold your horses! Why do you want a Senate inquiry? On what platform will you launch that inquiry? You are auditors? You are examiners? Wait until the Auditor General, who has the expertise and who has the staff has completed her report, hands it to Parliament; debate that and then talk about possible next steps.’ So we don’t agree. We say plainly, we don’t agree that there is any merit to the notion of a Senate inquiry at this stage. We think it is premature, and that’s where we stand.”

We asked: Do you intend to see that 13th Senator appointed?

“Do you see what’s happening in the United States? Where they have a system where paralysis is able to be engineered because the way that Republican model works, you can have one chamber controlled by the party that’s not – doesn’t form the administration. Do you see the difficulty they’ve been having with debt ceilings, and shutdowns and – no!” he said.

He told us that the 13th Senator would then mean that the Senate would be controlled by the Opposition and non-government Senators.

“They would have the power to paralyze the Government. I am very sorry. I was the one who, in fact, put that in a UDP manifesto; this Government pushed it forward in terms of constitutional reform, but I came to realize that it’s a wonderful ideal, but in practice, it will make no sense.”

Barrow went on to say that, “The Opposition is there to oppose. The so-called social sector partners are not there to be friends of the Government, and if you gave control of that Chamber to that combination, I am telling you there will be paralysis. Now, other people might have a different point of view and I respect that, but as far as I am concerned, the role of the Senate is to be a watchdog; it is to shine the light on what is happening, it’s like the Public Accounts Committee. It is not to substitute for the government…”

Barrow’s decision to hold off on the appointment of the 13th Senator was the subject of a legal challenge by Belizeans for Justice and Citizens organized for Liberty through Action (COLA).

In his ruling handed down on September 19, 2011, then Supreme Court Justice Samuel Awich said, “…the manifesto promise was a political decision and promise, and depended on the National Assembly enacting the promise. Legitimate expectation could not arise on a matter for political decision…