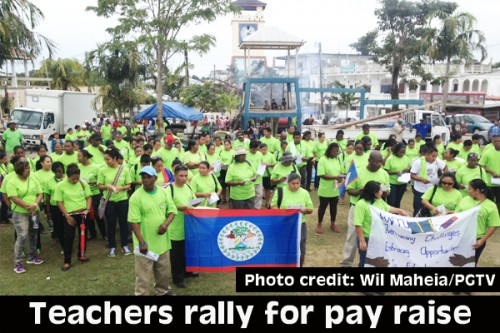 BELIZE CITY, Mon. Aug. 8, 2016–The punishment meted out by Hurricane Earl may extend beyond the devastation the storm has visited upon Central Belize. Amandala has been reliably informed that the presidents of three unions — the Public Service Union, the Belize National Teachers’ Union (BNTU) and the Association of Public Service Senior Managers (APSSM) — have been contacted to attend a meeting with Prime Minister and Minister of Finance Dean Barrow, who intends to ask teachers and public officers to defer the third tier of their salary adjustments, which became due in July.

The salary adjustment of 3% had not been paid because union officials were still consulting with their membership. The parties met with Financial Secretary Joseph Waight last week, when they also resurrected calls for the Government to revisit cost savings and revenue efficiency mechanisms in order to help ensure that the pay raise is sustainable—rather than triggering an eventual wave of retrenchments and/or wage freeze for teachers and public officers.

President of the BNTU, Luke Palacio, told Amandala today that no date has been set for the meeting. The BNTU is due to convene a council meeting to discuss the issues to be presented.

Sharon Fraser, president of the APSSM, indicated that the unions were already looking at the possibility of deferring the salary adjustment, because they, too, were concerned about the Government sustaining payments over time.

Although the Government initially proposed a 1% salary adjustment, the parties had agreed, after union officials worked the numbers, that they were due an adjustment of 3%. That was to have been paid in July, retroactive to April 1, 2016; “…except now, Earl came…,” Fraser said.