Home General Barrow will leave the Bar
Generallaw and order

Barrow will leave the Bar 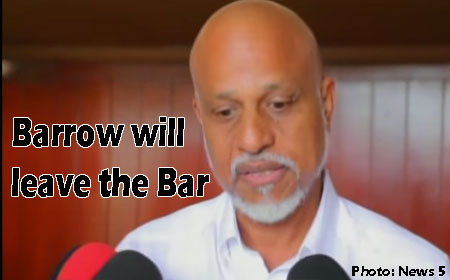 BELMOPAN–Prime Minister Dean Barrow told journalists outside the National Assembly on Friday that he will leave the Bar after new laws to remove the requirement in the Legal Profession Act for practising attorneys to join the association come into effect.

In the weekend issue of Amandala, we reported that an amendment is due to be tabled in Parliament today to remove the requirement for practising attorneys in Belize to be paying members of the Belize Bar Association.

Officials of the ruling United Democratic Party have criticized the Bar over resolutions it has passed challenging the retention of Justice Samuel Awich on the bench, but also more recently challenging his accession as justice in the Court of Appeal on a 7-year contract.

Last Friday, Prime Minister Dean Barrow said that the Bar, which he said is controlled by a small faction, is political. Officials of the ruling party have said that the Bar is aligned with the Opposition People’s United Party.

Amandala called the president of the Bar, Eamon Courtenay, SC, to get his reaction on the amendment, but we were told that he had not yet seen the documentation and would reserve comment until he does.

Barrow said that the question has been raised as to whether it is constitutional to oblige professionals to belong to a particular association for them to be able to earn a living in their field.

The amendment to the Legal Profession Act also proposes to change the composition of the General Legal Council, which, among other things, hears allegations of misconduct by lawyers.

The change will permit other attorneys who are not members of the Bar to serve on the Council through a direct appointment by the Attorney General of Belize and by the Chief Justice, who will head the reconstituted Council. Customarily, the Chief Justice would receive the findings from the Council before a final decision is announced on any case.

This is the same council which has received complaints against attorney Arthur Saldivar, the Belize Rural North constituency PUP standard bearer who was recently suspended by his party, pending internal investigations into what PUP leader Francis Fonseca has said is “…a very serious allegation that has been made in respect of certain monies that he took [from a client] and has not returned.”