BELIZE CITY, Mon. Oct. 23, 2017–After Week 11 games this past weekend, the situation is getting real interesting in the race to the Top-4 playoffs in the Premier League of Belize (PLB) 2017-2018 Opening Season. And upcoming Week 12 games could result in a new Top-4 list, with a struggling BDF in serious risk of falling to the fifth spot with another loss.

The weekend began with BDF FC losing their second straight game, as they fell, 2-0, to visiting Verdes FC at the FFB Stadium on Saturday afternoon. Verdes got a goal in each half, from Jarret Davis (22’) and Elroy “Bibs” Kuylen (90’), to tighten their grip on a playoff berth; while BDF must rebound this weekend against Police, if they want to maintain their hold on the fourth playoff spot. (See standings below.) A little later, on Saturday night at the Isidoro Beaton Stadium, in an official home game for Police United FC, league leading Belmopan Bandits SC, who claim the same home field, proved they were more “at home” than Police, cruising to a 5-1 victory with goals from Jerome “Jarro” James (47’), Georgie Welcome (50’ & 76’) and Darwin Bermudez (56’), along with an own goal from Police’s Jermaine Jones (61’ OG). Police avoided a shutout through Harrison “Cafu” Roches (78’). The other scheduled Saturday game, between Placencia Assassins FC and Wagiya FC, postponed due to wet field conditions, will be played on Wednesday night in Independence if weather permits.

The only Sunday game saw Punta Gorda’s Freedom Fighters FC putting up a gallant battle against visiting San Pedro Pirates FC at the Victor Sanchez Union Field; but the visitors came away with the 4-3 win. After Inri Gonzaga had given the Pirates a 1-nil lead at the 10th minute, Freedom Fighters equalized through the long dormant Ralph Flores at the 39th minute, and even took the lead with a 43rd minute goal from Mario Noralez. But, the visiting Pirates surged ahead in second half with a goal each from Luis Mencia (55’) and Jesse Smith (63’) and another strike from Inri Gonzaga (69’), for a 4-2 lead, before Freedom Fighters closed the gap to 4-3 with an 80thh minute goal from Allen Barillas. This is the Freedom Fighters’ tenth consecutive loss, after starting the season with a win; but the return of talented striker Ralph Flores to the scoring column may spell hopes for a strong season finish for the Freedom Fighters. San Pedro, meanwhile, are “knocking on the door” of the fourth playoff spot, just 2 points behind the struggling BDF FC. 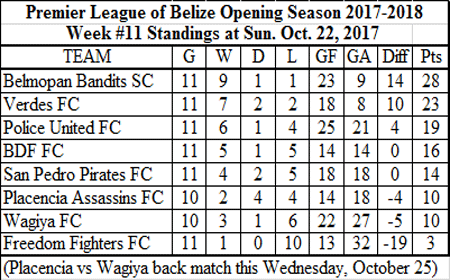 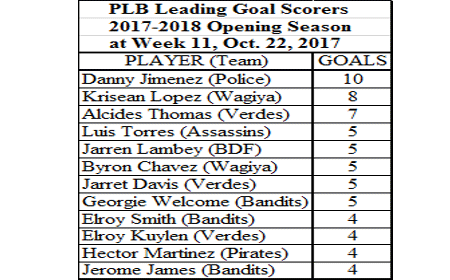