BDF and Police, an old rivalry 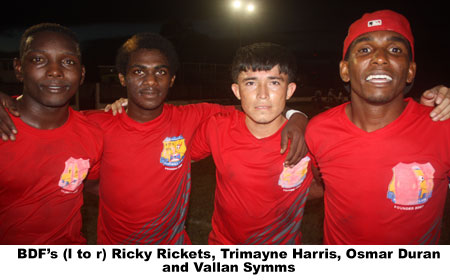 BELIZE CITY, Thurs. Dec. 8, 2016–It’s an old rivalry that goes way, way back. The Police team, under Sergeant Duncan, was the first to take part in the Belize City football competition back in the early 1970’s. When the Paramilitary, and then the BDF, came on stream a few years later, it was natural, as a part of building moral in the soldiers, for Captain Charles Good to lead his men into competition on the MCC.

The BDF was the first to achieve success in the Belize City competition, at one time in the early 1980s representing the City in the National Competition. Recruiting from across the country, the BDF squad was consistently one of the fittest teams in the then amateur tournaments, and always a step ahead of their Police brothers in the standings. And later in the semipro league (which began in 1991), it was BDF that first claimed a championship; actually, they three-peat between 2009-2011. Meanwhile, Police had not even entered the semipro league yet.

In fact, it was only recently, with new energy coming from then Assistant Commissioner Elodio Aragon, Jr. that some serious attention began to be given to the Police Team in a Belize City 1st Division Amateur (or was it Inter-Office?) Competition. It marked the return to football stardom of once promising National Team player Lennox “Criminal” Castillo, who had disappeared from the football scene for some years, following a career-threatening knee injury. But Criminal was back, leading all goal scorers and taking the MVP as Police won the championship, and was poised for an entry into the big leagues, where they soon joined their BDF counterparts in the semipro competition. 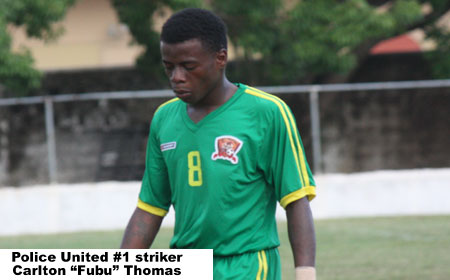 Meanwhile, since their last championship in 2011, BDF has been out of the trophy ceremonies. It is Police United who have been regular attendees at the “Big Dance.”

BDF has consistently reached the playoffs, as they have this season. But to reach the finals has proven difficult for them for a long time. Now, after a splendid regular season, conceding just 13 goals in 16 games played, only 2 more than #1 seed Belmopan Bandits, and finishing in the second seed position, BDF has only one more hurdle to climb to reach the coveted finals – Police United.

The uniformed men of our nation’s security forces – Police, BDF and Coast Guard personnel – teamed up earlier this year to make their mark for Belize in an international marathon-relay race in Texas.

This Sunday at the Norman Broaster Stadium in San Ignacio, they will be squaring off against each other, home standing Police United FC against visiting Belize Defense Force FC in game 1 of their semifinal series.

The only top-ten goal scorer on his team, explosive Police United striker, Carlton “Fubu” Thomas had a hand in the first two goals in their 3-2 win against Verdes FC last Sunday, and got what proved the game winner himself, sending his team into the playoffs as the 3rd seed. Fubu will be the man to watch for BDF defenders.

At the other end, it is difficult to pin-point any one striker as “the man” for BDF. No BDF striker is listed among the top ten goal scorers in regular season. (See list below.) Their veteran sweeper and penalty kicker Vallan Symms is their highest scorer with 6 goals. But there are a number of players on BDF that have proven they can step up when a goal is needed, and thus they have amassed a respectable team total of 29 goals.

They are sportsmen all, and will surely shake hands after the long whistle blows to end the match this Sunday. But till then, it will be “war” at the Norman Broaster. Don’t miss it.
PLB Top-10 Reg. Season Goal Scorers.