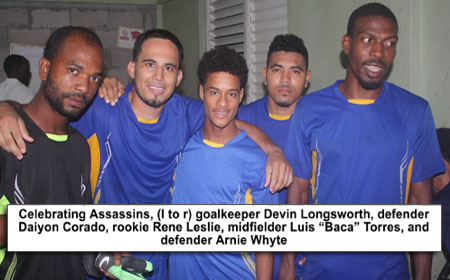 BELIZE CITY, Mon. Nov. 7, 2016–Despite the wet weather weekend long, the race to the PLB playoffs was hotly contested on Saturday and Sunday at the MCC Grounds, where four teams in the hunt for a playoff spot gave it their all.

BDF FC has made it thus far mostly on the strength of their defense, anchored by veteran sweeper Vallan Symms and culminating with All Belize goalkeeper Tevin Gamboa. But on Saturday night against visiting Verdes FC, after a scoreless first half, BDF’s young Osmar Duran made his name one to remember, as he launched a thirty-five yard free kick that cleared the wall and dived into the right “pigeon hole” past a bewildered Elroy “Zabble” Rowley in goal for Verdes. This happened just two minutes into second half. And, just in case anyone thought it was a fluke, Osmar followed with an even more impressive strike a half hour later. It began with a classic give-and-go sequence between Duran and left side striker Michael Myvette, and culminated with Duran unleashing a low right foot blast from just inside the eighteen towards the left corner past a diving Rowley, for the second BDF goal at the 79th minute.

Deon McCaulay played the full ninety for Verdes, but was ineffective on the heavy, slippery pitch, and confessed after the game that he is still hampered by an ankle injury that might force him out of action for a while. Verdes’ league leading scorer Jarret Davis tried gamely, as did ball wizard Gilroy “Bredda” Thurton, who got a couple good looks at goal, but his well-placed shots were not hard or “mean” enough to get past the nimble and quick Tevin Gamboa in goal, for BDF.

It was a very physical and evenly matched game, despite the score, but second half insert Jeremy Gentle put it out of reach for BDF when he got a break inside the eighteen on the right side, and left goalkeeper Rowley standing with a hard grounder to the far corner at the 89th minute. 3-nil, BDF; and that’s how it ended.

Notably absent from the game were outstanding Verdes midfielder Nahjib Guerra, who was nowhere to be seen; and star BDF defender Rickey Rickets, who sat out the game on the bench reportedly due to injury. With the victory, BDF is now right up “in the thick of things,” as the race to the 4-team playoffs really begins to heat up. (See standings.)

After some Saturday sunshine helped to improve the pitch a little at the MCC, the rains came back on Sunday morning, so that the Sunday evening clash between FC Belize and visiting Placencia Assassins saw an even more slippery and heavy playing field, making things especially difficult for the goalkeepers. And it resulted in two goals, one for each team, coming from high centers into the goal area; one a corner, that saw the goalkeepers having difficulty holding the ball, and resulting in skirmishes in front of goal, and finally a put-in by an alert forward. But the opening goal of the game was an absolute beauty, following as it did two fine early saves, at the 8th and 32nd minutes, from FC Belize goalie Rodrigo Vasquez, faced with one-on-one situations from close range; and also a missed opportunity at the other end, at the 35th minute, where the slippery ground caused a miss-play by Placencia sweeper/captain Dalton Eiley, that saw FC Belize striker Marlon Gutierrez on a break-away, that ended with a shot being saved by Placencia goalkeeper Devin Longsworth with assistance from his defense.

The goal of the game came 4 minutes later at the 39th minute. A long, high center from the Placencia left wing saw the FC Belize goalkeeper and defenders drifting to the right side, when Placencia’s scintillating midfielder Dellon Torres aggressively cut off the angle and rose high in the air around the penalty spot, above his defensive marker, and directed a strong header down to the left corner, as goalkeeper Vasquez, caught moving right, could only look on in despair as the ball bounced near the goalpost and settled inside the FC Belize net for the 1-nil Placencia lead.

The rains came down to start the second half, and intermittently the rest of the game. Placencia increased their lead to 2-nil, after what seemed a routine corner for FC Belize goalie Rodrigo Vasquez to handle, suddenly slipped from his hands, and in the aggressive scramble in front of goal, Placencia’s Justin Linares alertly tapped in their second goal at the 61st minute. But, in almost a mirror re-play at the other end a couple minutes later, an FC Belize free kick from just outside the eighteen saw Placencia goalie Devin Longsworth trying to punch the slippery ball out, but it went back and forth amongst attackers and defenders, until Floyd Jones (or was it Marlon Gutierrez?) drove it home for FC Belize, to cut the lead in half at the 63rd minute. FC Belize stayed on the attack, trying for the equalizer, while Placencia made a number of counter-attacking runs; but there were no more goals, as the Placencia Assassins dealt FC Belize their first loss on the field this season, 2-1. (FC Belize’s other loss was by default to Belmopan Bandits.) It was a very intense contest, despite the condition of the pitch, and both teams gained respect from each other; but last night, Placencia had the edge, and a well-deserved victory.

Elsewhere in Week 13 of the Premier League of Belize (PLB) Opening Season 2016-2017, also on Sunday, down south at the Victor Sanchez Union Field in Punta Gorda, Freedom Fighters FC recorded their second win of the season with a 5-2 score over visiting Orange Walk United FC. Shaking the net for Freedom Fighters were Elroy Coe (15’ & 65’), Alexander “Pleck” Peters (45’ & 77’) and Jarren Lambey (50’); while Orange Walk got a goal each from Joao Silva (34’) and Oscar Acevedo (55’). Meanwhile, out west at the Norman Broaster Stadium in San Ignacio, Police United FC place in playoff contention, with a 3-1 win over visiting Wagiya FC from Dangriga. Carlton “Fubu” Thomas struck twice (11’ & 62’) and Harrison “Cafu” Roches got the other (77’) for Police; while the sole tally for Wagiya was by Hector Gomez (35’).

Only 4 teams will make the playoffs. Right now, it looks like 6 teams in contention for those 4 spots, with Belmopan Bandits in the “driver’s seat.”