Home Sports BDF on top, Police on the bottom in Week 2 of PLB...
Sports 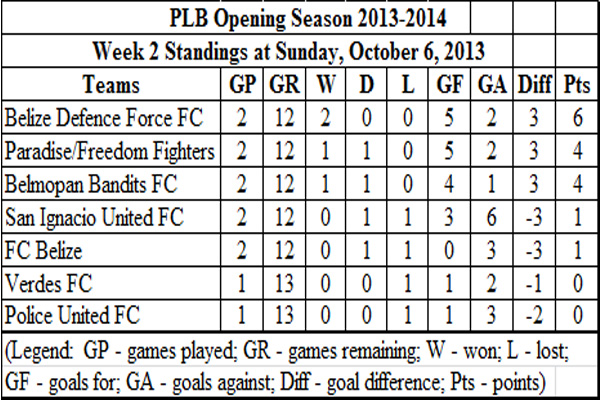 When the dust had settled after Week 2 games in the Premier League Opening Season on Saturday night and Sunday afternoon, one team, Belize Defence Force FC, remained a perfect 2-0, to claim unchallenged 1st place in the standings. Both Verdes FC and defending champion Police United FC are yet to gain a point, having both lost their season opener; but Verdes has a better goal difference (-1) compared to Police (-2), which makes it the second week running that the defending champion maintains cellar dweller status. The early surprise is the re-entry Paradise/Freedom Fighters, who sat out last season, and are now in 2nd place with a win and a draw.

On Saturday night, October 5, at the Isidoro Beaton Stadium, home standing Belmopan Bandits got 3 goals from Elroy “Bibbs” Kuylen (11’, 29’ & 88’) and 1 from Deon McCaulay (51’) to grab a comfortable 4-1 win over visiting San Ignacio United FC. San Ignacio’s only goal was by Anthony Gonzalez (57’).

Also on Saturday night, there was action down south at the Carl Ramos Stadium, where BDF won their first home game of the season when they stopped a game Verdes FC, 2-1, with first half goals by Ambrose Thomas (17’) and Vallan Symms (33’ PK). Verdes cut the lead in half through a header from Orlando “Leechi” Jimenez (53’) off a free kick from Norman “Tilliman” Nunez; but it wasn’t enough, as BDF held on for the 2-1 win.

The only Sunday afternoon game saw Paradise/Freedom Fighters do what only one team, Placencia Assassins, was able to do last season, score 3 goals on FC Belize. Franz Vernon (3’ & 62’) and Lisbey Castillo (49’) shook the net for the home squad to secure the 3-0 win over FC Belize at the Toledo Union Field.

(BDF is idle this week)