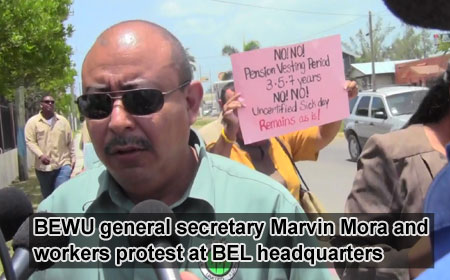 BELIZE CITY, Mon. July 20, 2015–A group of about 30 workers of the Belize Electricity Limited (BEL), mostly linesmen from the Magazine Road facility as well as a contingent of office staff from Belize City, sacrificed their lunch hour today to stage a peaceful protest outside the company’s headquarters at Mile 2½ on the Philip Goldson Highway, in a bid to get their first salary adjustment in 5 years.

Incidentally, the protest by workers of BEL, a government-owned utility, comes on the heels of the indefinite suspension of elective surgeries and specialty services last Friday at the national referral hospital – the Karl Heusner Memorial Hospital, whose workers have been demanding to be paid the 6% salary increase that public servants and teachers were awarded last year and the 8% being paid at the end of the month.

At its AGM held last month, BEL announced record profits of $36.2 million. We understand from the Belize Energy Workers Union (BEWU) that the salary increase being discussed would amount to a little over $3 million a year, based on preliminary information which BEL’s management has provided to the union.

Marvin Mora, General Secretary of BEWU, said that BEL introduced “the straitjacket approach,” in an attempt to tie the union to an amount even before they began to negotiate, but the union’s proposals, he said, were well within BEL’s limits.

“We are fighting for something that we believe we deserve. The company has made 36 million dollars… [which] these very same people here make happen for this company. So I don’t think we are asking for anything unfair,” said Mora, during the lunch-hour protest.

He added that the company had indicated that it could afford the payout without requesting an increase in electricity rates to consumers.

He told us that whereas BEL had agreed to a sort of middle ground between its offer of a 5% salary increase and the union’s demand of a 13% increase on the cost of labor, as well as pension and other benefits, the newly proposed 8.2% over 4 years, or 2% a year, comes with two preconditions—conditions to which the union is adamantly opposed.

The first precondition, Mora said, is the abolishment of a long-standing agreement between the workers and the company allowing staff to take a one-day casual sick leave without having to produce a doctor’s letter—seemingly prompted by reports of a sickout, amid salary negotiations, on Monday, May 18, when over 80 workers called in sick.

However, Mora said that while the report of the sickout was discussed as the possible reason that management wants to introduce this condition, it may, instead, be linked to changes in the Social Security payout scheme.

The second precondition, Mora said, is a reversion to the previous pension scheme which was in place when Lynn Young, former Fortis Inc. rep., ran the company. This would mean that employees who are now eligible for 100% pension after 7 years would only be entitled to 50% of what the company pays into the fund, apart from their personal contributions to the scheme.

The BEWU and BEL are quoting different numbers. In a statement issued by the company late this evening, BEL said that the company’s most recent offer was for a 29% increase in salaries and benefits, but it confirmed that the offer is being made on the two conditions outlined above.

“The condition regarding sick days is because the Company is of the view that the BEWU misused the existing benefit to stage the sickout. Therefore BEL is proposing to close that loophole,” the company said.

For its part, BEL claims that the increase in total salaries and benefits would amount to over $20 million per year at the end of the four years—a claim which Mora refutes, adding that the company has been inconsistent with the figures presented during the negotiations.

“When the workers get enough, then the workers will do what they have to do…” Mora said this evening, maintaining that no conditions ought to be set on the salary increases.

During today’s protest, we asked Mora whether there is room for compromise to break the impasse between BEL’s management and the union, and he said that the compromise proposed by the union was to have all the persons who meet the existing 7-year timeline remain with their pension option intact, which means that they would still be eligible for 100% pension should they choose to part ways with the company now. Under the old system, which Mora said the company wants to reintroduce, workers would only be entitled to 100% pension after 15 years with the company.

Mora said that it is only right for BEL to provide more incentives to workers, which, he said, would translate to better service to consumers. He noted that while the company’s shareholders are getting higher returns and customers have gotten a rate reduction, implemented only this month, workers are not seeing better benefits.

Addressing inevitable worries that unhappy workers will initiate industrial action, Mora assured that workers don’t want to cause a shutdown of power for customers, and that is why they opted to hold the peaceful demonstration during their lunch hour. 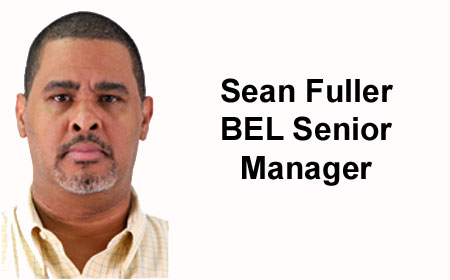 He said that the BEWU represents over 150 non-management employees, on whose behalf they are bargaining, and the majority of union members were still working and serving the public.

The BEWU plans to continue with its peaceful protest on Tuesday and Wednesday afternoon.

Mora said that they have verbally informed the National Trade Union Congress of Belize (NTUCB), of which he is the president, about the plight, and a written report to the NTUCB would follow.

We understand that the point man for BEL management in the negotiations is Sean Fuller, Senior Manager – Information Systems & Customer Care. We tried contacting Fuller for comment but were told that he is out of office until next week.