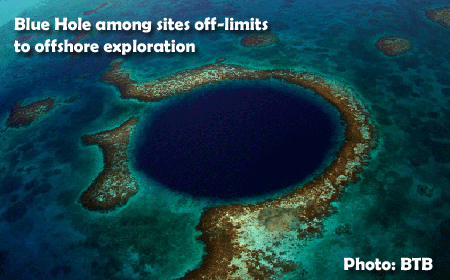 BELIZE CITY, Wed. Dec. 2, 2015–One week ahead of an official visit to Belize by World Heritage Centre (WHC) staff, to discuss efforts made by the Government towards the removal of the Belize Barrier Reef System from UNESCO’s list of World Heritage sites in danger, Cabinet announced a decision to adopt a policy that will provide a special carve-out for 8 offshore protected areas where petroleum exploration will be banned for the first time in Belize.

The announcement comes amid an unrelenting campaign here in Belize against offshore drilling that began to gain momentum in 2010, and which has benefitted from international pressure brought on by UNESCO.

Offshore exploration has been carried out in Belize—without major incident; but the Deep Water Horizon catastrophe of April 2010 quickly galvanized a demand for a more precautionary approach here in Belize, where any such accident would spell nothing short of devastation for this tiny Jewel and its open economy.

According to the Cabinet press release issued Tuesday, the total area covered by this historic ban spans 842,714 acres, or 1,316 square miles.

The announcement represents a 180-degree turn from the days when all of Belize’s offshore territory, including the Barrier Reef System and its prized atolls, were included under contract areas parceled out to petroleum exploration companies, some of which were unqualified to operate in the industry.

TOUR SITES BY CLICKING THE IMAGE BELOW:

The Department of Geology and Petroleum had previously informed us that 16 offshore wells had been drilled in Belize since 1958, and Island Oil had been allowed to drill off Monkey River as recently as 2007. In October of that same year, Princess Petroleum was given a petroleum exploration license over an area that included the Blue Hole; but that concession, originally for 200,000 acres onshore and 1.8 million acres offshore, expired in October of this year.

A draft zonation plan circulated last year caused controversy when it was observed that the Blue Hole and other prized marine locations were included in zones that could be open to offshore drilling. Tuesday’s announcement, then, was a walk-back from the government’s long-held position.

Back in 2012, the government announced that it would implement a temporary freeze on issuing offshore concessions after Taiwan relinquished a contract of over 1,800 square miles of offshore territory.

Today, a full moratorium on offshore drilling remains in effect, and the Government has undertaken that it would not automatically allow for seismic activities and exploration drilling elsewhere in offshore Belize unless “stringent environmental studies” are undertaken “to determine critical habitats and sensitive zones” as well as “the type and nature of exploration that can occur in these explorable areas.”

Whereas this presents only a partial ban on offshore drilling, the announcement has been hailed by proponents of a full ban as “a step in the right direction”—although some have told us that it does not go far enough, since, in their view, any drilling offshore could risk not just vital reef assets, but also thousands of livelihoods built upon the tourism and fisheries industries.

“This progress should be seen as a major accomplishment by and for the people of Belize,” says Oceana’s Vice President for Belize, Janelle Chanona.

However, Candy Gonzalez, president of BELPO – Belize Institute of Environmental Law and Policy, one of the NGOs which had lobbied against offshore drilling under the banner of the Belize Coalition to Save Our Natural Heritage, goes on to insist that, “We still maintain that there should be a ban on all offshore drilling.”

“Obviously, the ban doesn’t go far enough because anything that happens within the barrier reef is going to impact the entire barrier reef,” she added.

“The decision taken today by the GoB reflects recognition of what the people of Belize have been asking for years: the protection of job security, food security and cultural identity,” said a statement from Oceana, another Coalition member, in support of the announcement.

Back in 2012, 96% of 28,208 registered voters who participated in a referendum organized by Oceana with support from the Coalition, after the Government denied a referendum petition, said a resounding “NO” to offshore drilling.

“From legal, economic, scientific and cultural perspectives, Belizeans agree offshore oil is a bad idea. We remain confident that the future will continue to reveal reasons why Belizeans should never risk our outstanding and globally unique resources with this type of activity,” the Oceana statement issued today added.

Roberto Pott, Belize Coordinator of Healthy Reefs for Healthy People, told Amandala that “the move is a welcome one,” but added that “…there is still a lot to consider, because the areas within protected areas cover close to 20% of our territorial seas, and there is another 80% of marine space, not including the Exclusive Economic Zone, not captured within the ban.”

Pott added that the partial ban is not a complete safeguard for Belize for that same reason:

“Belize is not prepared for any type of oil spill offshore… and we are not prepared for a spill from the shipping of oil that is going on currently,” Pott said, pointing out that while the probability of a spill would be low, if it ever happens, it would carry a high cost.

“But we have to encourage government for moving to ban [drilling] in at least 20% of our territorial seas,” he concurred.

Reacting to the Cabinet announcement, UNESCO’s World Heritage Center issued a statement saying: “The decision is a major first step forward in the government’s efforts to remove the Belize Barrier Reef from the List of World Heritage Sites in Danger.”

The Belize Barrier Reef System, declared a World Heritage Site in 1996, was put on the danger list in 2009. However, this January, following a week-long dialogue with a UNESCO team, Prime Minister Dean Barrow confirmed government’s policy position to prohibit petroleum exploration within and adjacent to the protected areas in the Belize Barrier Reef System, under what the World Heritage Center calls the “desired state of conservation for the removal of the property from the List of World Heritage in Danger (DSOCR).”

Cabinet further agreed that areas that fall outside of the large acreages banned, would not automatically allow for seismic activities and exploration drilling without conducting the existing stringent environmental studies to determine critical habitats and sensitive zones.

Further to its commitments to the World Heritage Center, Belize is expected to meet two milestones by 31 January 2016: (1) finalize a map that defines the property’s surrounding areas where no oil exploration and exploitation can be permitted and (2) enshrine the policy in law for the permanent exclusion of the entire property and the defined surrounding areas from oil exploration and exploitation.

It was announced by UNESCO today that World Heritage Centre staff will travel to Belize from 8th to 15th December 2015, to discuss next steps forward—which will likely include new and/or amended legislation. Cabinet’s release omitted the news of the imminent UNESCO visit.

While Gonzalez said that they are “very happy” with the Cabinet decision, she added: “We would feel more comfortable if it was written into legislation.”

Chanona noted that based on Belize’s agreement with UNESCO, anything done for UNESCO has to be legislated and enshrined in a legal document.

She informed us that in June 2015, Oceana proposed draft legislation to the Government of Belize, captioned, “Clean Ocean and Safe Tourism Act, 2015”, which sets out proposed conditions for the lifting of the existing moratorium.

The draft bill submitted by Oceana calls for:

• an amended Environmental Impact Assessment regulations to include all offshore petroleum operations, including seismic testing, to the list of activities that require EIAs

• a referendum to determine whether the moratorium should ever be lifted.

Some proponents of a complete ban on offshore drilling hope that Belize’s world famous barrier reef, said to be second only to Australia’s, would one day enjoy the kind of protective status enshrined in Australian law for its reef. Of note is that unlike Belize, where only sections of the reef system have protected status, the Great Barrier Reef of Australia has been designated a mega marine park; and since its designation in 1975, oil exploration, mining and exploration have been banned in the area, which also enjoys World Heritage status.