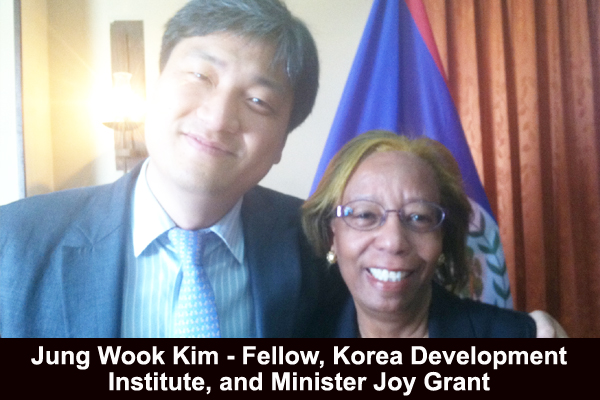 The National Transportation Master Plan for Belize was at the center of a senior policy dialogue held Friday morning at the Radisson Fort George Hotel in Belize City. That multimillion-dollar plan is divided into three phases, spanning well beyond the year 2030.

Belize has been receiving technical assistance from a team of 10 Korean experts, led by Professor Eui Young Shon of the Department of Transportation Engineering at University of Seoul’s Institute of Transport Studies. Senator Joy Audrey Grant, Minister of Energy, Science & Technology and Public Utilities, told the media Friday that the relationship with Korea started about two years ago and they have been meeting ever since.

Jung Wook Kim (KDI) – Fellow, Korea Development Institute, told the media that Korea has been working with Belize as part of a knowledge-sharing program sponsored by the Korean government, to help other developing countries. He said that they formally began their collaboration in 2013. The Korean team also includes Seol Joo Kim of Teso Engineering Company.

Both Grant and Kim emphasized the value of having the data needed to develop a sound plan.

“We actually took the Koreans to some of the bus terminals and we saw the need. The question came back again to data collection. We really do not have numbers,” Grant said.

She said that people will have to be put on the ground to collect the data needed, and in her view, Belize has to make data collection a priority.

Minister Grant told the media that the plan proposes major investments to upgrade the Coastal Road as well as the access road to Altun Ha. They will also look at whether the Commerce Bight Port can be made operational once again. The plan forecasts a USD7.6 mil benefit for upgrades to the Coastal Road.

Whereas the Government hopes to primarily finance the plan from grant funds and concessionary financing, tax reform measures are also under consideration, specifically tax reform for economic growth and competitiveness, especially in the tourism sector; and a special or earmarked tax for the transport sector.

BZ$20 million has already been earmarked for key projects. They were detailed in today’s policy dialogue as follows: $6.0 million from the OPEC Fund, Kuwait Fund and CABEI for the continuation of the upgrading of the Southern Highway; $5.0 million from CDB for the new Macal River Crossing( in Cayo District, including upgrading roads to the new bridge site); $3.0 million from CABEI for the new Corozal Border Crossing Reconstruction Project to upgrade facilities and infrastructure at the second Belize/Mexico Bridge; and $6.0 million from the World Bank for the Belize Municipal Development Project to improve access to basic municipal infrastructure and to enhance municipal management in selected towns and city councils.

“If you’re saying you are going to upgrade a road, then you need to know what is the demand? Will people move there? Will there be additional agricultural production?” Grant explained.

She noted that the upgrade of the Coastal Road should not only foster development, but should also aid with disaster risk management. It should help expedite evacuations from Belize City, as well as provide a viable alternate route for big trucks which currently use the Hummingbird Highway.

Phase 2 includes road investment for boosting major industries, refinements to the Caracol Road and the widening and expansion of the taxiway for airstrips in Corozal, San Pedro, Caye Caulker, Dangriga, Placencia, and Punta Gorda.

Phase 3 will entail the establishment of industrial infrastructure for long-term economic development and improvements to enhance the connectivity between northern and western regions, among other plans.

Works should begin on the ground in about two years. Whereas the minister said she could not provide budget details, she noted that road construction generally costs $1 million a mile, but costs more for roads that require specialty works to take climate change into account.

She said that Belize is one of the top 10 countries for adverse effects from climate change, and this must be taken into account.

According to Grant, it is ideal for Belize to look at the construction of elevated causeways, but those are very expensive and so Belize has to look at what it can afford.

In Mexico next week, leaders from the Association of Caribbean States (ACS) will be meeting for a summit in Mexico, and among the plans on their agenda is one that includes a unified air and land transportation system for the region.

We asked Grant what consideration is being given to this move, and she told us that Belize’s plan will have to fit into the regional scheme. Other institutions are looking at long-term planning in this regard, and Grant said that there is the need to bring them all under one regional master plan.